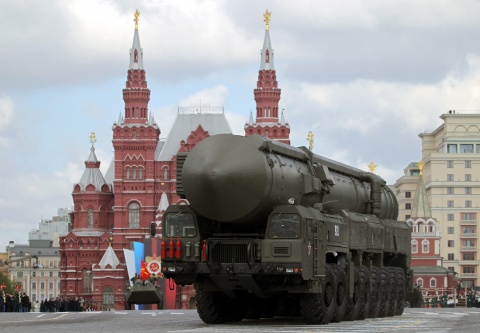 A strategic missile Topol-M makes an impressive entry into Red Square during the Victory Day parade in Moscow, Russia 09 May 2011. Russian people celebrate the Victory over Nazi Germany in the WWII on May 09. EPA/BGNES

Some 22 000 soldiers and a massive amount of military equipment including tanks and ballistic missiles took part in the celebrations of the Soviet Union victory over Nazi Germany in Russia's capital Moscow.

Sixty-six years later Russians across the country celebrated Victory Day, May 9, 1945, while remembering the death of 26 million Soviet citizens during World War II, with the military parade on Red Square in Moscow being the pinnacle of the celebrations.

"Today Russia firmly upholds the principles of peaceful cooperation, consistently advocates for a security system and contributes to the overall effort to maintain global stability," Russian President Medvedev said in his speech.

"The freedom of the people, the dignity of the nation, and the peace of the own home are things that are dear to everyone, and make us a united and strong nation," Medvedev stated.

Over 5 300 cities and towns in Russia with over 100 parades celebrated the Victory Day, with an estimated 14 million people participating in the celebrations.