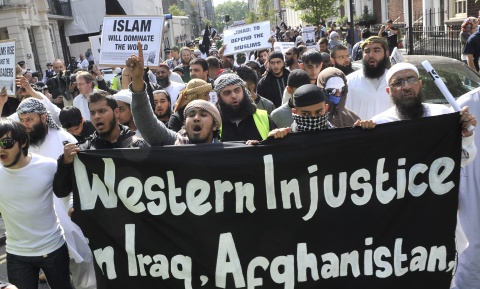 Muslim demonstrators march on the U.S embassy in London, Britain, 06 May 2011. Muslims gathered outside the U.S embassy after Friday prayers to protest following the death of Bin Laden. Photo by EPA/BGNES

The Associated Press has filed a legal request for the photos of Osama Bin Laden's dead body, citing the Freedom of Information Act.

The agency also demands that it is provided with the video of the raid taken by the military personnel during the raid and on the USS Carl Vinson, the ship that conducted his burial at sea.

The government has 20 days to respond.

President Barack Obama announced on Thursday that he has decided the US would not release photos of the dead Osama Bin Laden over fears that the graphic photos would fan violence and hatred.

Obama's decision prompted a mixed reaction from US politicians with the democrats generally sharing the President's view and Republicans saying it is a mistake.

The al-Qaeda founder and leader was shot dead in a raid on Monday by US special forces in northern Pakistan.

Bin Laden is seen as the mastermind of the September 11 attacks on New York, Washington and Pennsylvania as well as of many other terrorist plots.