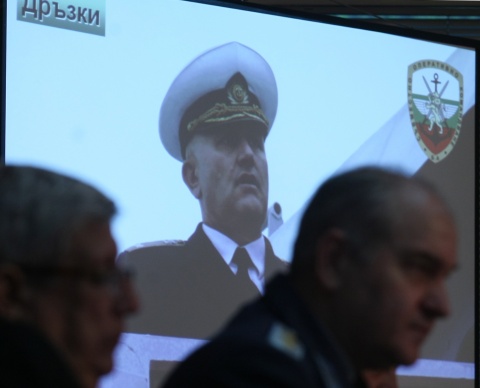 Captain Pancho Panchev, commander of the Drazki frigate, shown reporting to Defense Minister Angelov (left) through a video conference about the naval mission off Libya's coast. Photo by BGNES

Shortly after it started patrolling off the Libyan coast within NATO's United Protector operation to enforce a UN arms embargo, the Bulgarian frigate Drazki is set for its midterm break.

Bulgarian Defense Minister Anyu Angelov held a video conference Thursday with the commanders of the Bulgarian military contingents stationed abroad including the crew of the Drazki frigate of the Bulgarian Navy.

In two weeks, the Bulgarian frigate will have a three day break on the Greek island of Crete for refueling and fresh food and water supplies.

The captain of the Drazki frigate, Pancho Panchev, reported that the vessel has been patrolling in the Mediterranean as instructed by the NATO command but has not been given the task yet to inspect cargo ships or fishing boats.

Captain Panchev further reported to the Bulgarian Defense Minister that the crew are in good condition, and the frigate has no technical issues.

Panchev stressed that the Bulgarian Navy crew has found that its training to be adequate for the international mission in the Mediterranean. The range of activity of the Bulgarian Navy is traditionally confined to the Black Sea; the only time it operated outside the Black Sea was in 2009 when a Bulgarian crew brought from Belgium via the Atlantic Ocean and the Mediterranean three vessels that Bulgaria bought second-hand.

The frigate is manned by a 160-member crew who will receive bonuses of EUR 51-53 per day for the duration of the mission.

Neighboring Romania participates in the NATO naval operation off Libya's coast with the King Ferdinand frigate. The Romanian frigate is manned by 205-member crew.