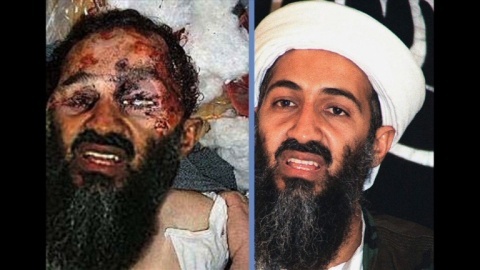 A fake photo of Osama Bin Laden`s wounded head (L) circulated on television and internet worldwide on Monday before being debunked as a photoshopped photo from 2009. Photo by EPA/BGNES

A photograph of Osama bin Laden's body will be released at some point to silence doubters, but that it is up to the White House to make the final call, according to CIA Director.

"I just think it's important, they know we have it, to release it," Leon Panetta said, as cited by CNN, but failed to specify when this may happen.

According to a senior US official, the White House has received three sets of photographs. The first batch, which clearly show bin Laden's body, was taken at a hangar in Afghanistan, the official said.

The official described one of the images as a clear, but gruesome, picture of his face. Bin Laden is shown with a massive open head wound across both eyes, the official said, adding that the image would not be appropriate for the front pages of newspapers.

The other photos include the raid on the compound and bin Laden's burial at sea, according to the official.

US officials have said they are weighing the appropriateness of such a release, worried that it might fuel anger against the United States.

Bin Laden, 54, was the founder and leader of al-Qaeda. He is believed to have ordered the attacks on New York and Washington on 11 September 2001, as well as a number of other deadly bombings.

Bin Laden, his son Khalid, trusted personal courier Sheikh Abu Ahmed and the courier's brother were all killed, along with an unidentified woman.

Bin Laden was shot above his left eye, blowing away a section of his skull, and was also shot in the chest.