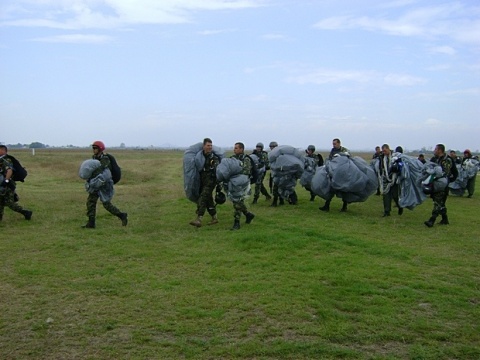 The 2011 "Thracian Spring," an annual Bulgarian-American military exercise, will last till May 5, and is concentrated around the Plovdiv Airport and the Krumovo Air Base. Photo by dariknews

A Bulgarian paratrooper almost landed on James Warlick, US Ambassador to the country, during the Bulgarian-US military training "Thracian Spring 2011" at the Krumovo Air Base.

Fortunately, the diplomat got away with a fairly mild contact with the "attacker", Darik radio reports. One of his interpreters, however, suffered more from the landing, even though she was not injured.

Interestingly, the minor accident triggered a jubilant reaction on behalf of nationalist Ataka (Attack) MP, Ventsislav Lakov, who was present at the event.

"Ha-ha, Ambassador Warlick received a kick in the head from a Bulgarian paratrooper at Krumovo...He was begging for it, in the least because of the American pilots' monument in front of the Embassy :)," gloating Lakov wrote in a post on his Facebook profile not forgetting to add a smiley face.

He was referring to an initiative of the US Embassy for honoring the US pilots who were killed in the American air raids on Bulgaria during World War II.

Lakov's reaction fits the profile of the nationalist party Ataka, an informal ally of the ruling center-right party GERB and often notorious for its initiatives, which has occasionally employed anti-American rhetoric.

The 2011 "Thracian Spring," an annual Bulgarian-American military exercise, will last till May 5, and is concentrated around the Plovdiv Airport and the Krumovo Air Base. The drill includes night and day training of parachute units, low altitude tactical flights, transportation of troops and equipment, avio-medical evacuation, rescue operations, and providing humanitarian aid supplies to population in disaster zones.

On Monday, the "assaulted" Ambassador James Warlick declared it was a wonderful day, since Osama bin Laden was finally killed.