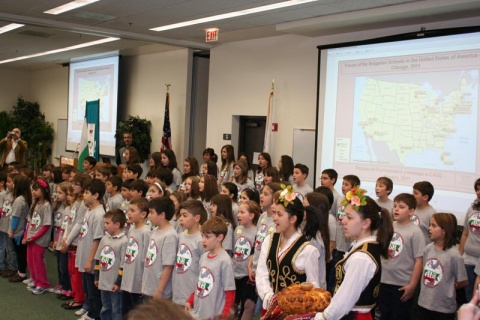 Students from the "John Atanassov" school in Chicago greet the participants in the forum dedicated to the future of Bulgarian schools abroad. Photo by Eurochicago.

The Bulgarian Ministry of Education must work on a bill which will legalize Bulgarian schools abroad, participants in the Bulgarian Schools Forum insisted.

The event, titled "The Role of Bulgarian Communities in the US for the Preservation of Bulgarian Language and National Self-Awareness," was held over the weekend at Oakton Community college in Chicago, USA.

Chicago is home of the largest Bulgarian community in America.

The event was organized by the Bulgarian "John Atanassov" school in Chicago and the Association of Bulgarian Schools Abroad (ABUCH).

Over 110 representatives from Bulgarian schools in 13 States across the US were in attendance to meet Education Minister, Sergey Ignatov, and Deputy Speaker of the Parliament, Georgi Pirinski. They insisted on a clear definition of criteria to give licenses to Bulgarian schools outside the country.

The forum was opened with a greeting from students from the "John Atanassov" school and by its Principal, Boyanka Ivanova, Member of the ABUCH Board, who introduced the official guests.

In addition to Ignatov and Pirinski, addresses were delivered by the Bulgarian Charge d'Affaires at the Embassy in Washington DC, Tihomir Stoychev; by PhD, Boyan Koulov, Chair of ABUCH, by Pat Michalski, Assistant for Ethnic Affairs of the Cook County Treasurer, Maria Pappas.

According to data of Bulgarian educators abroad, only 9 400 Bulgarian children are included in the program to teach Bulgarian language and culture while another 200 000 to 300 000 are waiting over the lack of State funding, which is estimated at the modest amount of BGN 1 000 per child for the school year.

It became clear during the debates that schools abroad are functioning as a legal paradox – they do exist, but according to current Bulgarian legislation – they don't. Their maintenance and work are currently paid for only by private donations and they count mainly on volunteer work.

"For us Bulgaria is everywhere where there is a Bulgarian community or school," the Minister, cited by the Bulgarian daily "Trud" (Labor), has stated.

Ignatov further explained that at the moment financing of Bulgarian schools abroad is based on a competition principle under the "Native Language and Culture" program, but a good definition of criteria would give them a statute where they can receive a certain percentage of the State budget.

The Minister is quoted saying he was optimistic after the Chicago event.