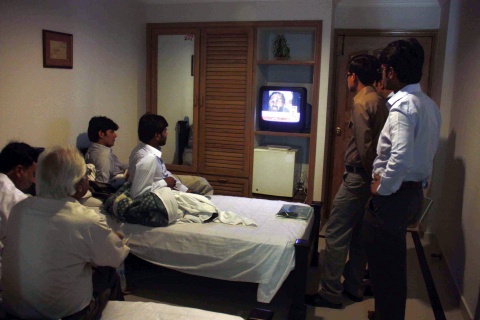 akistani men watch news on television showing a handout picture of Osama Bin Laden, leader of Al-Qaeda, who was killed in an operation in Abbotabad, at a hotel, in Islamabad, Pakistan on 02 May 2011. Photo by EPA/BGNES

The body of Osama bin Laden, the founder and leader of the Al Qaeda terrorist network, has been buried at sea after being killed early on Monday in an US raid.

The body has been handled according to strict Muslim traditions, which include the burial taking place within 24 hours ofter the death. Even though bin Laden was a Saudi citizen, the Arab kingdom has not wanted his body repatriated, CBS reports.

Burying bin Laden's body at sea would ensure that his final resting place does not become a shrine and a place of pilgrimage for his followers, American network ABC pointed out.

Early on Monday, bin Laden was killed in a military operation in Pakistan that U.S. President Barack Obama ordered on Sunday. U.S. special forces launched a helicopter-borne assault on a closely guarded compound in Abbottabad, 30 miles north-east of Islamabad, on Sunday night, Obama and US officials explained.

Bin Laden and three other individuals, among whom one of his sons and a woman used as a human shield, were killed in a firefight. The operation lasted 40 minutes, according to the Guardian. Six other sons, three wives and four aides were arrested, Lieutenant General Ahmad Shuja Pasha, the director general of Inter-Services Intelligence, said before the Dunaya television.

Osama bin Laden's death is putting an end to the worldwide hunt for him that the US has been staging since after the September 11, 2001, terrorist attacks in New York City, and Washington, DC.

Even before September 11, bin Laden was already on the FBI's Ten Most Wanted Fugitives list.

He had been implicated in a series of deadly, high-profile attacks that had grown in their intensity and success during the 1990s.