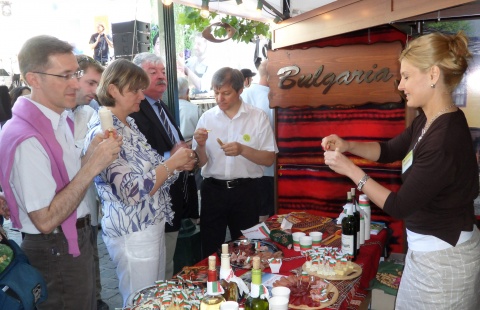 Bulgaria's agriculture sector is said to be gaining export momentum. Photo by BGNES

Bulgaria's agriculture sector appears to be taking off, according to data presented by the Agriculture Ministry and the National Statistical Institute.

The Agriculture Ministry boasts that what it describes as "proactive export policies of the state have led to increasing the export potential of Bulgarian agricultural products."

Thus, in 2010 Bulgaria's agriculture exports amounted to USD 3.468 B compared with USD 2.795 B in 2009, a year-on-year growth of 24%. About 72% of the Bulgarian agricultural export goes to the rest of the EU with Russia, Ukraine, Turkey, and the Arab world re-emerging as important markets as well.

On quarterly basis in 2010, Bulgaria's agriculture registered the fastest growth of all economic sectors.

The Agriculture Ministry points out that Bulgaria is one of the top eight EU member states in terms of the growth of the average income from agriculture. In 2010, Bulgaria's average agriculture income grew by 23% compared with 12.3% for the EU 27. The Ministry points out that Bulgaria's growth has surpassed the growth rates in older EU member states such as Germany, Spain, the UK, Greece, and Portugal.

According to the Bulgarian Agriculture Ministry, fallow land in Bulgaria declined by 15% in 2010 compared with 2006, and is down to 8% of the total agricultural land in the country compared with 9.1% in 2006.

The Ministry further boasts an increased rate of processing projects applying for funding from the EU Rural Development Program. It says that 36% of Bulgaria's total funds under the program for 2007-2013 have been contracted, and 19.7% have been paid out to beneficiaries, which means that the program has the highest level of absorption of all EU programs in Bulgaria.

The Ministry has asked the European Commission for changes in the program in order to benefit the animal breeding sector of agriculture.

The Ministry of Agriculture says it is restructuring the management of forests, and has not allowed construction in the forest plots acquired through the notorious land swap deals carried out by the previous two Cabinets.