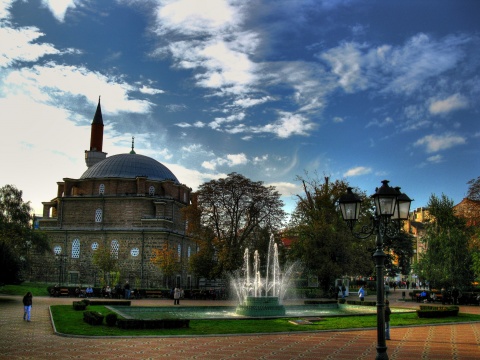 The Banya Bashi mosque in downtown Sofia is located near an Orthodox cathedral, a synagogue, and a Catholic church. Photo by panoramio.com

The Bulgarian Chief Mufti's Office has protested against what they describe as a ill-minded provocation on part of the nationalist party Ataka during Friday's Muslim prayer in downtown Sofia.

A car of the Ataka part is reported to have appeared with loudspeakers near the Banya Bashi mosque in the very center of Sofia during Friday's Muslim prayer playing Orthodox Christian songs and the sound of church bells.

The Banya Bashi mosque in downtown itself has loudspeakers that sound Muslim prayers in the entire area around it – which itself has been a grievance taken up by nationalists and Sofia residents.

"Is this the tolerance of the Bulgarian politicians?" the leadership of the Bulgarian Chief Mufti's Office asks in a public declaration protesting Ataka's provocation on Friday saying that the prayer of the some 1 500 Muslims praying in the Banya Bashi mosque.

The mosque staff called the police who arrived shortly leading the car of the nationalists to disappear from the scene.

According to the Chief Mufti's Office, the nationalist party Ataka has lost momentum and public trust and is trying to attract attention by staging provocations against the Bulgarian Muslims and raising anti-Islam slogans.

"Such actions will probably be the major and leading motive in the party's campaign for the upcoming elections, and we expect a growing antagonism against us. We underscore that their plans have been deciphered. We call upon the Muslim community not to succumb to such provocations but we also state that we won't bear with such frivolities denigrating the dignity and freedom of the citizens trying to observe their religion in accordance with the Constitution and laws of the state," says the Chief Mufti's Office declaration.

It promises to alert the Prosecutor's Office, the Interior Ministry, and the State National Security Agency DANS because such threats are said to be dangerous to Bulgaria's national security and public order and can escalate into unexpected forms and scope.