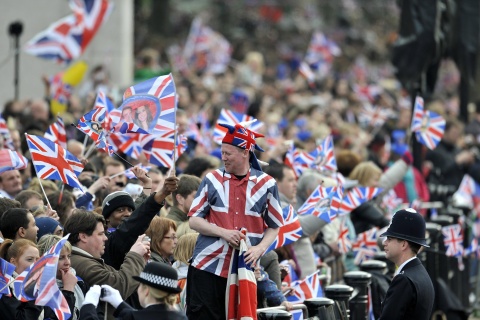 Members of the public wait before Buckingham Palace in London, Britain, 29 April 2011, for the Royal newlyweds to pass on their way to it. Photo by EPA/BGNES

The Mayor of the Bulgarian village of Zabardo, in the Rhodope Mountains, Veselin Cherpokov, has sent an official invitation to British Prince William and his bride, Kate Middleton, to pay a visit to the village.

Zabardo is known for its folklore, traditions and the Zabardo Wheel, a carousel that became the symbol of a couple's never-ending love and devotion.

In a congratulations address to the British Embassy in Sofia, the Mayor is inviting the royal newly-weds to take a spin on the Wheel.

In addition, the famous Zabardo grandmothers' folk group has modified a popular Rhodope folk song with new arrangement and text, dedicated to William and Kate.