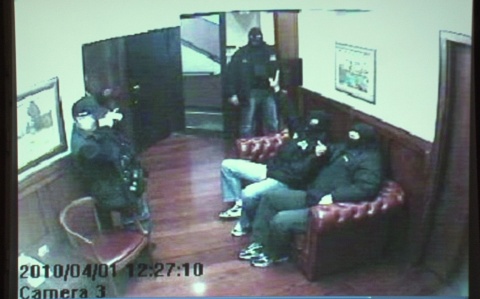 After the high-profile arrest in question, the police officers are seen by the camera in the office sitting on a couch and posing for a photo. Photo by BGNES

A video of what seems like police brutality was shown in a Bulgarian court Wednesday during a high-profile trial against the country's former Defense Minister, Nikolay Tsonev and two other officials.

Financial consultant Tencho Popov, one of the defendants, is shown in the video being beaten up by employees of the Bulgarian Interior Ministry. His head is being hit against a door case and he is consequently seen lying on the ground with a masked police officer stepping on his hand. The action takes place at the notary office of Popov's wife, it is caught on camera by an Interior Ministry employee and has been given to the Sofia City Court by the defense.

Popov, Tsonev and judge Petar Santirov were charged with bribing investigator Petyo Petrov, to forge evidence that would lead to a positive outcome for Tsonev of another investigation against him. The amount of the bribe was reported to have been EUR 60 000.

The video, which was shown in court Wednesday, ended with Tencho Popov as caught by the camera at the office after the alleged police brutality took place. After the police camera stopped shooting, he is seen sitting calmly and without handcuffs.

After the arrest, the police officers are seen by the camera in the office sitting on a couch and posing for a picture.

The arrest of Nikolay Tsonev on April 1, which was also filmed and broadcast by the Interior Ministry, spurred a public outrage of police brutality as masked police officers made him kneel to the ground while Deputy Sofia Prosecutor Roman Vasilev called him "a criminal". The Ethics Commission at Bulgaria's Supreme Judicial Council (VSS) later sanctioned Vasilev, for his inappropriate behavior during the arrest.