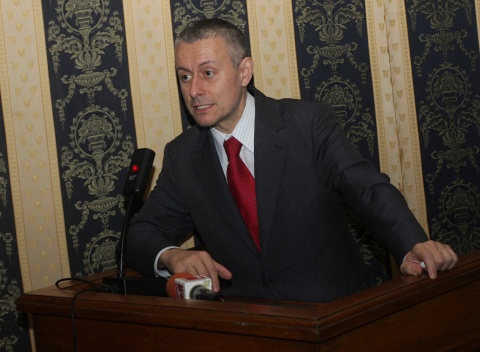 President of the Atlantic Club in Bulgaria Dr. Solomon Passy believes the EU must become a collective member of NATO. Photo by BGNES

Exclusive interview of Novinite.com (Sofia News Agency) with Dr. Solomon Passy on the occasion of the 6th year since the signing of Bulgaria's EU accession treaty on April 25, 2005, and the 20th birthday of the Atlantic Club in Bulgaria.

Solomon Passy is the founder and President of the Atlantic Club of Bulgaria, former Bulgarian Foreign Minister (in the government of Simeon Saxe-Coburg in 2001-2005), and Chairperson-in-Office of the Organization for Security and Cooperation in Europe in 2004.

Six years ago on this day (April 26, 2005) in your capacity as Foreign Minister you took part in the signing of Bulgaria's EU accession treaty. Bulgaria has now been a member of the EU for 4 years, and of NATO for 7 years. What is the today's balance sheet?

The first thing that strikes one's mind is that our team of negotiators back then was really conducting the accession talks with the EU the right way. We got Bulgaria in the EU in the first possible moment. What is more, this was probably also the last possible moment for a long time to come.

Figuratively speaking, Bulgaria got into the last door of the last car of the last train of EU enlargement, and it grabbed it with only one hand while hopping on one leg. But we did manage to get on the EU train. It is clear now that if we hadn't managed to do that back then, we wouldn't have been able to do it till this very day. Right before our eyes we have the very clear example of Croatia which hasn't signed its EU accession treaty yet; it doesn't even have a date for accession yet.

For Bulgaria back in 2005 the uncertainties were much greater. If our accession had been deferred, we would have no way of knowing whether we would be coupled with Croatia, with Macedonia, or with Turkey. That is, there were various scenarios, and all of them were from bad to worse. We can now be satisfied that we realized the one good scenario for Bulgaria by signing the accession treaty on April 25, 2005, and joining the EU on January 1, 2007.

The Atlantic Club in Bulgaria just celebrated its 20th birthday, for which you organized a conference entitled "Europe as a Global Actor." Why did you decide to focus on Europe for your special event?

The EU has set a very ambitious goal in the Lisbon Treaty – namely to become a global actor. And we believe that Bulgaria has a lot to contribute to the realization of this goal.

One of the most intimate spheres of EU's "globalization" is the relations between the EU and NATO. However, I believe that the NATO-EU relations need to be completely transformed, and not just to be transformed but to progress towards taking a qualitatively new shape.

Western political thought has been struggling with the question of what the magic formula for the NATO-EU relationship should be. Does what you just said mean that you can offer some clues as how to find the road to this magic formula?

Over the past few years the Atlantic Club in Bulgaria has suggested various solutions in that respect which are complementary with one another. But we do have some new ideas.

I think that some of our older proposals are still worthy – especially the idea to set up a NATO-EU Council similar to the NATO-Russia Council and NATO-Ukraine Council. This means that we can create an instrument for constant dialogue between the EU and NATO exactly the way the existing NATO councils work.

But we should also start thinking in a qualitatively new direction which will contribute greatly to the "globalization" of the EU.

What I mean is that it will be very beneficial for the EU and international politics as a whole if the EU decides in favor of becoming a collective member of NATO, and one day achieves this goal.

At present, the EU has been struggling for months, maybe years, to get a special recognition through a UN resolution in order to earn the right to speak and vote, and to have independent behavior within the UN.

But I think that such ambitions will be much easier to achieve if it had the special status of being a collective member of NATO. This will to a great extent bridge the differences within the EU between the countries which are NATO members and those which are not.

What will be the benefits of this development for individual EU and NATO member states like Bulgaria if the EU becomes a collective member of NATO, i.e. a member in its own right?

The Lisbon Treaty stipulates that the EU needs to create a common EU defense. I actually have some very good news in that regard.

Bulgaria has been applying to join various EU structures for a very long time. I think that we are now mature enough to become the founders of such structures. The benefits of the common EU defense – and, in the long run, of a common EU army - are countless – starting with the optimization of forces and funds all the way to global warming policies. In a nutshell, the benefits are worth trillions of euros.

The EU is currently facing various crises – the unrest in the Middle East and North Africa, and in Libya in particular, Schengen controversies and illegal immigration, the euro zone debt crisis, and the questionable Euro-Plus-Pact. Do you think the EU is cracking? Do you think it will be able to hold out on all fronts?

It depends on what time period you are looking at. For example, 60 years ago Europe had much greater "cracks." Today we have achieved a significant level of integration in Europe.

But what keeps driving us forward is our dissatisfaction. We want to achieve more and more integration and to turn the European Union into a state. This will happen eventually but it will just take a long time.

It is true that the EU is not as unified as we would want it to be but it is also true that it is a lot more unified than it was in the past, and that this process has seen impressive impetus and acceleration.

The Atlantic Club in Bulgaria just turned 20. It was founded in 1991, a year after you personally "threw a bomb" in the Bulgarian Grand National Assembly in 1990 by saying that Bulgaria must become a NATO member while it was still a member of the Warsaw Pact back then. What did the Atlantic Club manage to achieve in the past 20 years, and what is it that you didn't achieve?

We have achieved our main goals – Bulgaria's membership in NATO and the EU. But what matters for us from now on is not what we've done but what we can do in the next 20 years. There are great challenges ahead for Bulgaria, Europe and the world. We would like to define them as much as possible, and to work to neutralize the threats and maximize the beneficial scenarios.

One of these goals is Bulgaria's accession to the Organization for Economic Cooperation and Development headquartered in Paris. This is the club of the rich countries around the world.

The road to it will automatically make Bulgaira behave in a way that will turn it into a rich country. I believe that after Bulgaria joined NATO and the EU the state lost the priorities that used to mobilize it, and the Atlantic Club is now ready with new ideas and message such as seeking OECD membership and Bulgaria's role in the common EU defense from its very beginning.