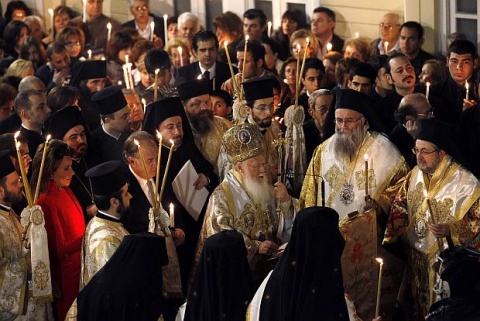 The building of the Bulgarian Iron Church in Istanbul was filled with people wishing to attend the Easter Mass Saturday into Sunday. Photo by BGNES

Thousands of Bulgarians celebrated Easter in Istanbul, Turkey, Saturday into Sunday with the mass traditionally held at the St. Stefan church.

The service at the church near the Golden Horn, known also as the Iron Church, began at 11 pm Saturday and was delivered by Bishop Teodosiy, who arrived, with three other clergy, from Bulgaria.

Many worshipers also traveled from Bulgaria to Istanbul to attend the Easter Mass there. The building and the yard were filled with people. At midnight sharp the church bell announced the resurrection of Christ while Teodosiy blessed the attendees.

People greeted each other with the traditional "Christ Is Risen," and went around the church three times in observance of the Easter ritual. They also exchanged colored eggs and the Easter bread called kozunak.

A mass was also served at another Istanbul church – St. Ivan Rilski, of the Bulgarian eparchy in Shishli because the Iron Church can no longer accommodate all the worshipers. The mass was served by the priest of Bulgarian churches in Istanbul, Father Angel.

Those who attended the services at St. Stefan were also in for a pleasant surprise – a giant colored egg made from plaster was mounted in the yard. The egg, about 1.5 meter-high, placed in a basket, and lit inside with beams of different colors, is said to have been a splendid site.

The idea for the egg belongs to the Bulgarian community in Istanbul and is made as a special gift and memory for their fellow countrymen and women, who come each year to celebrate Easter together with them near the Golden Horn.

The celebrations in Istanbul also marked the 151st anniversary of "Bulgarian Easter" which led to the restoration of an independent Bulgarian Orthodox Church.

On April 3 1860 Ilarion Makariopolski refused to mention the Greek Patriarch's name in an Easter service. This led to the struggle between the Bulgarians, led by Neofit Bozveli and Makariopolski, and the Greeks intensifying throughout the 1860s. By the end of the decade, Bulgarian bishoprics had expelled most of the Greek clerics, thus the whole of northern Bulgaria, as well as the northern parts of Thrace and Macedonia had effectively seceded from the Patriarchate.

The Ottoman government restored the Bulgarian Patriarchate under the name of "Bulgarian Exarchate" by a decree (firman) of the Sultan promulgated on February 28, 1870. The original Exarchate extended over present-day northern Bulgaria (Moesia), Thrace without the Vilayet of Adrianople, as well as over north-eastern Macedonia.