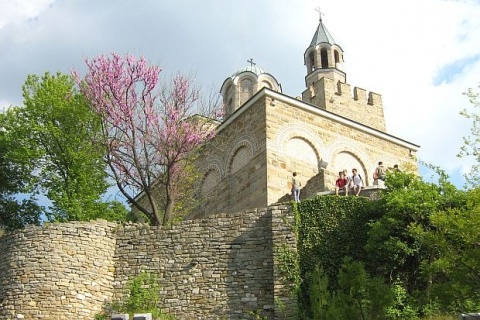 The medieval fortress Tsarevets in the city of Veliko Taranovo in Bulgaria. Photo by Sofia Photo Agency

An Easter Mass in the old Bulgarian capital of Veliko Tarnovo is going to be served at the Tsarevets fortress for the first time in 618 years.

The mass will be held Saturday evening into Sunday outside the walls of the fortress, but within the patriarchy complex since the church in the medieval fortress is not canonized.

The service will be led by the Veliko Tarnovo Metropolitan Grigoriy, who is going to distribute the holy fire to the attendees.

The entire ceremony starts at 11 pm Saturday. The visitors of Tsarevets are to walk on a route marked by white ribbons and lit by 120 torches.

The joint idea of the Veliko Tarnovo clergy and the City Hall is to restore the tradition to hold masses at the location, dating from the Second Bulgarian Kingdom.