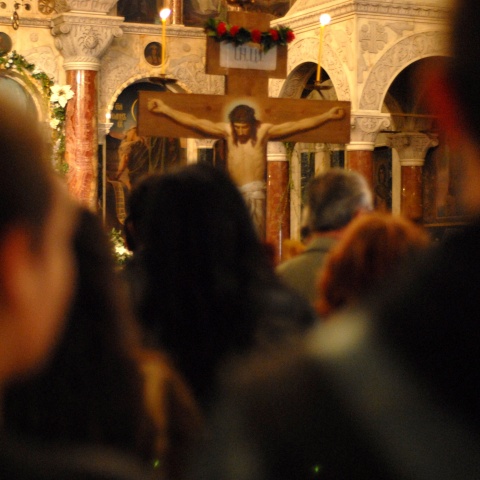 Churches all over Bulgaria are serving masses to mourn the crucified son of God. Photo by Sofia Photo Agency

Bulgarian Christians mark Good Friday, the day that commemorates the death of Jesus Christ by crucifixion.

Good Friday, also called Holy Friday, Black Friday, Great Friday, is a holiday observed primarily by adherents to Christianity commemorating the crucifixion of Jesus Christ and his death at Calvary. The holiday is observed during Holy Week as part of the Paschal Triduum on the Friday preceding Easter Sunday, and often coincides with the Jewish observance of Passover.

Based on the scriptural details of the Sanhedrin Trial of Jesus, the Crucifixion of Jesus was most probably on a Friday. The estimated year of Good Friday is AD 33, by two different groups, and originally as AD 34 by Isaac Newton via the differences between the Biblical and Julian calendars and the crescent of the moon. A third method, using a completely different astronomical approach based on a lunar Crucifixion darkness and eclipse model arrives at the same date, namely Friday April 3, AD 33.

In Bulgaria, together with Christmas, Good Friday and Easter are the holiest days in the Orthodox calendar, and are observed with great solemnity.

Churches all over the country are serving masses to mourn the crucified son of God.

Fasting is especially strict on this day - the Church advises believers not to have any food at all, and to not even drink water. Few Bulgarians, however, are usually that strict.

But the most joyful time of the festival is the Feast of Ascension - commemorating the ascension of Christ into heaven - when Bulgarians spend cheery time with family and friends tapping colored eggs. Whoever comes out of the game with their egg unbroken is the winner, and they are believed to have luck over the next one year.