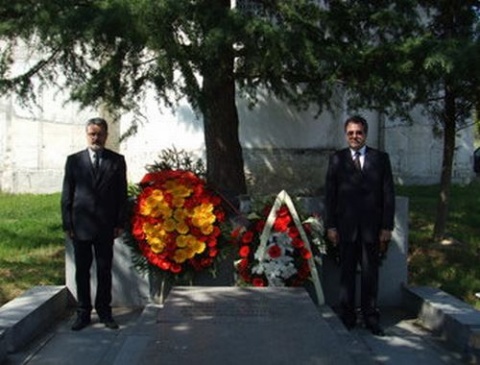 Senior Bulgarian and Macedonian officials laid wraths at the grave of revolutionary Yane Sandanski on Thursday. Photo by the Bulgarian Foreign Ministry

Bulgarian and Macedonian officials commemorated Yane Sandanski, a revolutionary of importance for both countries, on the occasion of the 96-th anniversary of his death.

The Permanent Secretary of the Ministry of Bulgaria's Foreign, Affairs Maxim Gaitandjiev, and the Ambassador of Macedonia to the country, Blagoi Handzhiyski, laid wreaths at the grave of Yane Sandanski, near the Bulgarian Rozhen Monastery.

The initiative comes from the Embassy of the Republic of Macedonia in Sofia. It is an expression of the common desire of both countries to mark dates, events and personalities that are important for the history of both states, the Bulgarian Foreign Ministry declared.

Yane Sandanski was one of the leaders of the VMORO (Internal Macedonian-Adrianople Revolutionary Organization; initially called "Bulgarian Macedonian-Adrianople Revolutionary Committee"; the "Bulgarian" ethnonym was dropped later to attract the other ethnicities to the cause). He operated in the Serres region and was head of the extreme leftist wing of the organization.

Yane Sandanski was involved in the Revolutionary Movement in Macedonia and Thrace and became one of its leaders. Since the start of his revolutionary activity, he gained popularity because he protected the local villagers in Pirin Macedonia from the tyranny of the Ottomans, organizing courts and taught self-defence. He was also one of the organizers of the Miss Stone Affair - America's first modern hostage crisis

Yane Sandanski considered himself and is considered an ethnic Bulgarian in Bulgaria and abroad but is regarded as an ethnic Macedonian in the Republic of Macedonia, whose independant history as a nation started in 1944.