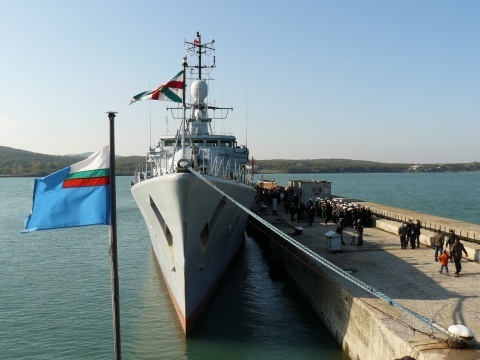 Bulgaria's "Drazki" frigate will be ready for departure to the Mediterranean in late April to take part in the NATO operations in Libya. Photo by BGNES

The Drazki (i.e. "Daring") frigate of the Bulgarian Navy will set out to join NATO's Operation "United Protector" patrolling off Libya's coast to enforce a UN arms embargo on April 27.

Speaking at a news conference in Sofia Thursday, Defense Minister Anyu Angelov announced the Drazki frigate will patrol in the Mediterranean for a month, and will take five days to sail to its patrol zone, and 5 days to come back.

Angelov also announced the Drazki mission, which is Bulgaria's only military contribution to the NATO efforts against the regime of dictator Muammar Gaddafi, will cost the state budget about BGN 1.5 M.

The frigate will be manned by 160-member crew who will receive bonuses of EUR 51-53 per day for the duration of the mission.

The Defense Minister emphasized that the funds for the Drazki frigate mission were saved thanks to austerity measures; for example, in the first quarter of 2011, the ministry economized from salaries saving about BGN 500 000.

In addition to sending in the Drazki frigate, Bulgaria has confirmed its readiness to send two medical teams for a humanitarian operation on the ground in Libya.

Bulgaria follows the example of neighboring Romania, whose President Traian Basescu announced that his country will participate in the NATO naval operation off Libya's coast with the King Ferdinand frigate. The Romanian frigate will be manned by 205-member crew.