Translation Blunder Tangles Bulgarian President in Scandal with US Ambassador 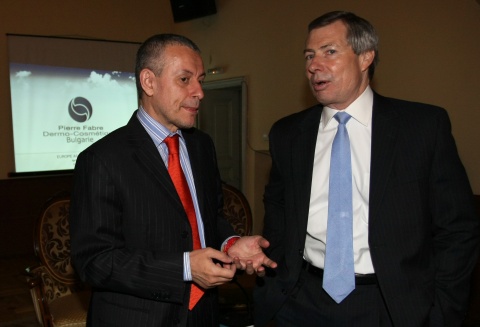 US Ambassador to Bulgaria James Warlick (right) pictured here with Solomon Passy, President of the Atlantic Club in Bulgaria, at the conference dedicated to the Club's 20th birthday. Photo by BGNES

A translation blunder has led Bulgarian President Georgi Parvanov to slam US Ambassador in Sofia James Warlick in a Facebook post comparing him to a notorious envoy of the Russian Emperor in Sofia in the late 19th century.

Parvanov reacted strongly and quickly to a statement made by US Ambassador in Sofia James Warlick, who was one of the speakers at the "Europe as a Global Actor" Conference in Sofia Wednesday organized on the occasion of the 20th birthday of the Atlantic Club in Bulgaria.

In his statement, Warlick mentioned the ongoing public dispute between Bulgarian Defense Minister Anyu Angelov and Bulgarian President and commander-in-chief by law Georgi Parvanov on how to define the role and tasks of the Bulgarian armed forces. Parvanov has been accusing Gen. Angelov of creating "an army for exports", i.e. one that is too focused on serving in foreign missions abroad while neglecting the defense of Bulgaria's territorial integrity. Angelov has been defending a boost of the military's expendition capabilities to honor Bulgaria's international partnership commitments.

Warlick was originally quoted as saying that the dispute between Bulgarian President Georgi Parvanov and Defense Minister Anyu Angelov was a "farce discussion." President Parvanov's reaction on Facebook was as follows:

"The discussion between President Georgi Parvanov and Defense Minister Anyu Angelov about the defense policy of the nation seems a little bit like a farce. This is what US Ambassador James Warlick said today. I will only point out that since the time of General Kaulbars, a special envoy of the Russian Emperor, no foreign envoy has ever behaved like that, like a governor-general. If there is something farcical, it is Warlick's behavior."

The historical personality to whom Parvanov compared Warlick, General Nikolai von Kaulbars, was a notorious Russian envoy sent to newly-liberated Bulgaria during the political crisis of 1886-1887 caused by the abdication of the first Bulgarian ruler after the Liberation in 1878, Prince Alexander I Batenberg.

Kaulbars was sent by Russian Emperor Alexander III to convey his will for the development of the young Bulgarian state. Kaulbars alarmed the native Bulgarian politicians with his cheeky behavior and direct intervention in the nation's internal affairs as he was seeking to impose the Russian Tsar's will. He was subsequently forced to leave the country causing a horrendous rift in Bulgarian-Russian ties regardless of the fact that Russia had liberated Bulgaria from Ottoman Turkey less than a decade earlier.

Shortly after Parvanov's Facebook post, the US Embassy in Sofia reacted by making a clarification about what Warlick actually said at Wednesday's conference.

According to it, Warlick never said the discussion between the President and the Defense Minister was a "farce"; his actual words were, "It's a little bit of a false discussion, and that's what I would like to reflect on a little bit right now".

The clarification of the US Embassy makes sense in the context of the statement made by the US Ambassador to Bulgaria at the "Europe as a Global Actor" conference because Warlick continued by describing the Parvanov-Angelov discussion as "interesting", and by pointing out that Bulgaria has already taken part in a number of peace-keeping missions around the world.

Warlick even read the whole list of international operations with the participation of Bulgarian peace-keepers since 1990 – Chad, Ethiopia and Eritrea, Iraq, Cambodia, Bosnia and Herzegovina, Georgia, Somalia, etc – and described the list as "impressive."

Bulgarian President Georgi Parvanov has not reacted on Facebook or in any other way after the translation clarification was made. However, his post got more than 70 "Likes", and about 25 comments by Bulgarians most of which were negative towards Warlick even after the ambassador's exact words were clarified.