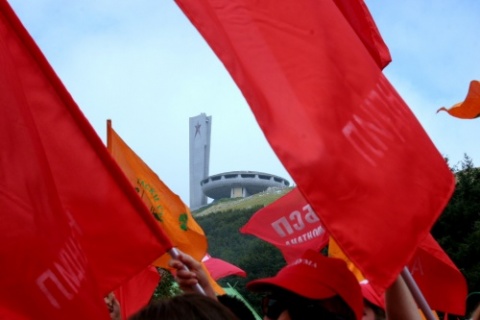 Tens of thousands Bulgarian Socialist gather every year for their celebration at Buzludzha mountain. Photo by BGNES.

The names of the tandem of the opposition Bulgarian Socialist Party, BSP, to enter the presidential race in the fall, will be revealed by the time of the party's the yearly celebration on Buzludzha peak.

The news was reported by the Secretary of the BSP National Council, Evgeniy Uzunov, speaking for the Bulgarian National Radio, BNR.

Every year, at the end of July, Bulgarian Socialists gather in the Central Stara Planina mountain range to mark the founding of the Bulgarian Social-Democratic Party, the predecessor of BSP. The party was established there in 1981 by Dimitar Blagoev and fellow Socialists. Buzludzha is also the site of a historic battle in the 19-century fight for the independence of Bulgaria.

"We want to determine these candidates in the most democratic way," Uzunov points out.