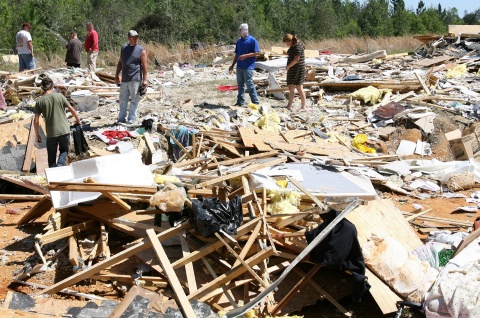 Friends and family go through the debris of what is left of Gene Box's trailer after a tornado killed her and two of her children while ripping through Washington County, Alabama USA on 16 April 2011. EPA/BGNES

At least 35 people have been killed by tornadoes, hail, and floods in the southeastern part of the USA.

The latest state to be hit was North Carolina, where 62 tornadoes left a trail of destruction in the worst storm to hit the state in two decades.

North Carolina Governor Beverly Perdue has declared a state of emergency after deaths were reported in four counties, the BBC reported.

Oklahoma, Arkansas, Mississippi, Alabama, Georgia and Virginia have also been affected. The death toll of the inclement weather that struck the southeastern states in the past three days is expected to climb as rescue teams search damaged areas.

The storms first struck Oklahoma on Thursday before sweeping eastward through other states.

North Carolina Governor Beverly Perdue said the number of tornadoes was the highest since 1984.

"Our thoughts and prayers are with everybody in North Carolina who has been through this horrible day," Gov Perdue said.

Fatalities have also been reported in Alabama, Arkansas, Oklahoma and Mississippi. The storms have now moved out over the Atlantic.