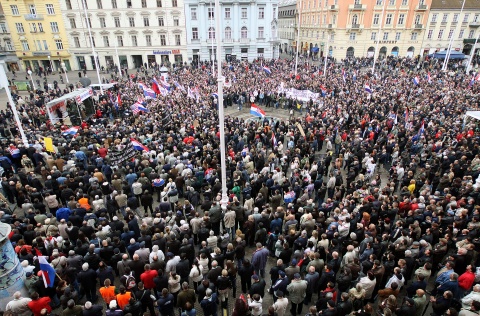 Dismayed and angry Croatia gather in Zagreb's central Ban Jelacic square in protest of what they see as a hit against their country by the Hague criminal court. Photo by EPA/BGNES

More than 10,000 people have gathered in Zagreb's central square Saturday to express their anger at the International Criminal Tribunal's sentencing of two Croatian generals for crimes against humanity.

Gen. Ante Gotovina has been sentenced to 24, and Gen. Mladen Markac to 18 years in prison, for the murder of over 300 civilians and soldier who gave up their arms, as well as the displacement of more than 90,000 persons from Serbian-populated eastern Croatia during the so-called Operation Storm.

Protestors are carrying slogans such as "Shame!" and "New Aggression against Croatia," seeing the verdict as a hit against the country's war of independence.

Some have commented that the sentence will boost already-rife anti-EU feelings in the country. Croatia is facing the end of a slow EU membership application process, and is expected to join within the next few years.

Many demonstrators are carrying anti-EU and anti-government signs. PM Jadranka Kosor has nonetheless also joined the outcry against the verdicts, calling them "inadmissible."

Similar protests are taking place in major cities and towns accross the country.