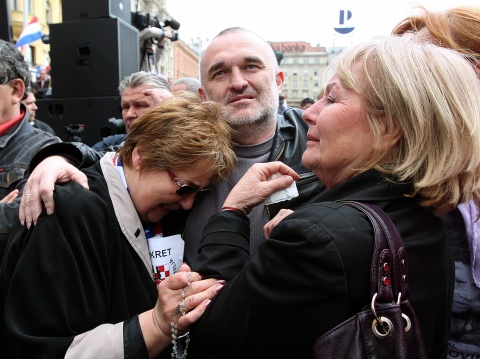 Croatia has been deeply shocken by the Hague Tribunal's Friday sentencing of generals Ante Gotovina and Mladen Markac for crimes against humanity committed during the 1991-5 war of independence.

Gen. Gotovina has been sentenced to 24, and Gen. Markac to 18 years in prison, for the murder of over 300 civilians and soldier who gave up their arms, as well as the displacement of more than 90,000 persons from Serbian-populated eastern Croatia during the so-called Operation Storm.

Friday and Saturday rallies of Croatians, including veterans from the war, were held in Zagreb and other cities to protest the verdicts.

Croatia's PM Jadranka Kosor has also reacted sharply at the sentences, describing them as "unacceptable."

"We are proud with our war victories which gave us the chance to live in a free and democratic state," said the Croatian PM.

Saturday Croatia's main papers, such as Jutarni List, Vecherni List and Vijestnik, came out with emotional materials on the conclusion of the Hague case.

Jutarni List comments that Croatia is in a state "between indignance and disgust" at the verdict, which allegedly implies that Croatia was an aggressor.

Vijestnik concurs in seeing the verdict as affecting the entire nation.

The Novi List newspaper, on the other hand, remarks that the historical facts of violence against civilian population ought not to be ignored, and that the verdict against Croatia's then top generals does not put into question the entire war of independence.

A third top Croatian general, Ivan Cermak, has been aquited by the Hague Tribunal, and met PM Kosor Saturday.