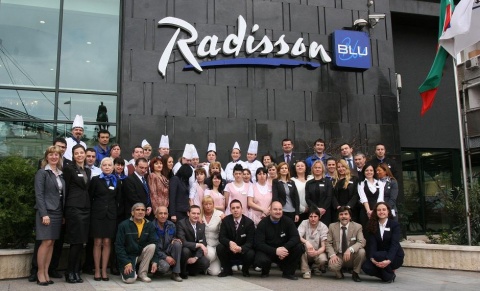 The team of the Radisson Blu Grand Hotel in Bulgaria's Sofia on the occasion of its 10th birthday. Photo by M3 Communications

The Radisson Blu Grand Hotel in the Bulgarian capital Sofia is celebrating its 10th birthday with special charity and business projects as well as a glamorous reception.

The General Manager of the Radisson Blu Deborah Haines hosted Thursday morning a breakfast for the media on the occasion of the 10th year since the opening of the five-star hotel.

"I am happy and proud to announce the ten-year presence of the Radisson Blu Grand Hotel on the Bulgarian market. I believe that with the support of our staff we have managed to gain strong positions and to find our place in the history of Sofia. Not only have we welcomed high-profile figures – from kings and queens to movie and music stars – but we have also managed to create perfect friendships and partnerships in these past 10 years. In the next ten years we are planning to explore more business opportunities and to help our guests feel even more comfortable staying with us," Haines declared.

The celebration of the Radisson Blu Sofia's 10th birthday started last week with a charity night in which talented Bulgarian students were invited to paint the cityscape that they can see from the hotel. Their paintings will be auctioned off, and the funds will be used to support art and young artists.

Radisson's 10th birthday was also marked with a business meeting between General Manager Haines and the Governing Board of the Bulgarian Academy of Sciences, which is headquartered just opposite the five-star hotel. The meeting focused on a number of joint business and social initiatives that are expected to yield considerable support and contribution to the culture, science, and business life in the Bulgarian capital.

The glamorous formal reception for the 10th birthday of the Radisson Blu Sofia is taking place at Flannagans on the Square. Jorg Schiffman, Vice President of Rezidor Hotel Group, will be a special guest of the reception, which to be attended by the political and business elite in Sofia.

Rezidor Hotel Group is one of the fastest-growing hotel chains in the world. Its portfolio includes over 400 hotels with 86 300 rooms in over 60 countries.

Rezidor Hotel Group is headquartered in Brussels. In November 2006, it was listed on the Stockholm Stock Exchange. Carlson Companies is the major shareholder in the group.