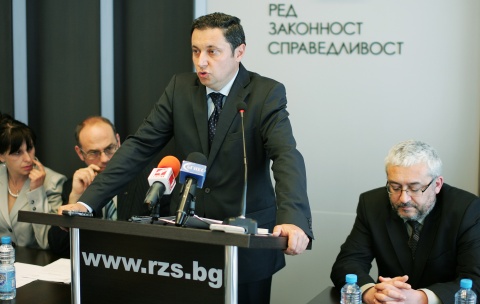 FMD and a "Turkish conspiracy" are the latest targets of the vocal RZS leader Yane Yanev. Photo by BGNES

Yane Yanev, the vocal leader of the marginal Bulgarian conservative party RZS, has declared the outbreak of foot-and-mouth disease in Southeast Bulgaria to be fake and an international conspiracy.

The "Order, Law, Justice" (RZS) party has been involved in all kinds of unproven claims and political scandals in the past couple of years, and has been highly critical of the ruling GERB party and the Borisov Cabinet.

According to Yanev, the entire epidemic of FMD in the Strandzha region along Bulgaria's border with Turkey has been made up.

He said a press conference Friday that the "fake" FMD outbreak is an arrangement, or a "business deal" between Bulgarian Agriculture Minister Miroslav Naydenov and big Turkish firms buying out agricultural land in the region.

"This is connected with the intentions of the Turkish state to depopulate the Strandzha Mountain region. This FMD provocation is aimed at depriving the local people of their livelihood," Yanev claims.

He said that 15 veterinarians belonging to his party inspected the spots on the ground in Southeast Bulgaria and found no indications of FMD, and that they are ready to testify and prove their claims; what is more, the RZS party will send samples to a lab in Paris.

Six Bulgarian villages have been affected by the renewed outbreak of the FMD in the Burgas District, with thousands of domestic animals being put to death after the disease first appeared in January-February 2011. It is believed to have been transferred to Bulgarian by wild animals crossing from Turkey.

Yanev and his party RZS have been involved in various sensationalist claims of dubious authenticity, including about the rise of radical Islam among Bulgarian Muslims.