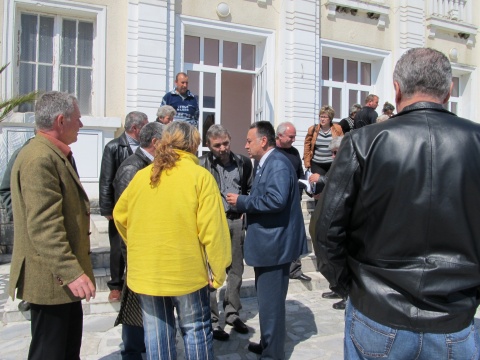 Owners of destroyed FMD-infected livestock are seen Thursday, April 7, awaiting the payment of compensations by the government in the Tsarevo municipality. Photo by BGNES

A sixth village in Southeast Bulgaria has been contaminated with food-and-mouth disease in the past four weeks leading to the slaughter of hundreds more domestic animals.

The latest FMD flare was found Thursday by inspectors of Bulgaria's Food Safety Agency in the village of Dolno Yabalkovo, Sredets Municipality, which shows that the FMD is crawling east with most of the previous cases being in the Malko Tarnovo and Tsarevo municipalities.

The village of Dolno Yabalkovo is located 4.5-km away from Bulgaria's border with Turkey, and it is within the 3-km safety radius from the village of Kirovo where a FMD outbreak was detected earlier. The FDM has been found to be transferred to Bulgarian domestic animals by wild animals crossing from Turkey into the region of the Strandzha mountain.

A total of 325 goats and sheep and 45 cows and buffaloes owned by 6 persons will be put to death and their corpses buried in the village in order to contain the spread of FMD, while the owners will be compensated.

The village of Bliznak is located near the village of Granichar where FMD was discovered recently some 10 km away from the border with Turkey.

After 12 years without FMD cases, in late December all throughout February, Bulgaria saw three outbreaks of FMD originally brought into Bulgaria by a wild boar from Turkey. After several hundred domestic animals were destroyed and a number local and EC-sanctioned measures were introduced, the authorities gained the upper hand.

The first of the new FMD outbreaks was detected on March 20, 2011, in three more villages in the southeastern Bulgarian Strandzha mountain, a day before the European Commission was expected to lift the measures, imposed on the Burgas District.

The new outbreak was found at a private farm near the village of Kirovo, close to the border with Turkey. In the next few days, FMD was also found in sheep from various villages in the poor and sparsely populated region - Goliamo Bukovo, Fakia and Momina Tsarkva near the town of Sredets.

Last week Bulgarian Agriculture Minister Miroslav Naydenov announced in Parliament that the Borisov Cabinet is going to go ahead with the plans to restore some of the Cold War era fences along the Bulgarian-Turkish border in order to prevent wild animals infected with FMD from trespassing into Bulgaria and infecting the domestic livestock.