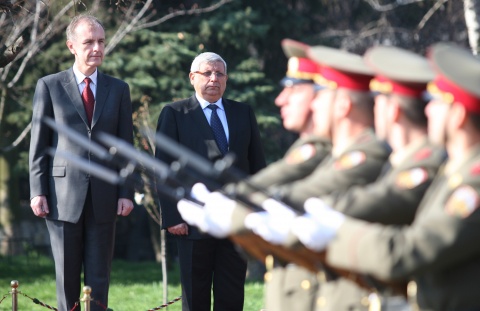 Bulgaria has declared all-out support for the plans of the Polish EU Presidency to boost the European Security and Defense Policy, the defense ministers of Bulgaria and Poland declared in Sofia.

"Bulgaria supports the major priorities of the Polish EU Presidency in the realm of the common security and defense policy," Bulgarian Defense Minister Gen. Anyu Angelov announced at a briefing after welcoming in Sofia his Polish counterpart Bogdan Klich.

Poland will take over the EU Presidency from Hungary for six months as of July 1, 2011.

"The four security and defense policy priorities of the Polish EU Presidency are reinforcing the cooperation between NATO and the EU, more efficient use of the battle groups of the EU, improving the coordination in joint use of civilian and military capacities, and active cooperation with the so called "third countries," Poland's National Defense Minister Klich explained.

Angelov and Klich announced that Bulgaria and Poland are drafting a new cooperation agreement between the two Defense Ministries that will open up new opportunities. They stressed cybersecurity as field for exchanging experience.

The talks of the defense ministers of Bulgaria and Poland further focused on the situation in the Balkans and the EUROFOR Operation ALTHEA in Bosnia and Herzegovina, the situation in Afghanistan, and the options for cooperation between the two countries' military-industrial complexes; defense against cyberattacks and the development of the NATO/US missile shield in Europe were also on the agenda, according to the press service of the Bulgarian Defense Ministry.

"Our two countries have not had such active contacts in the field of defense and security in 10 years," Poland's Defense Minister Klich is quoted as saying.

With his visit in Bulgaria Klich has returned Angelov's visit in Poland in September 2010.