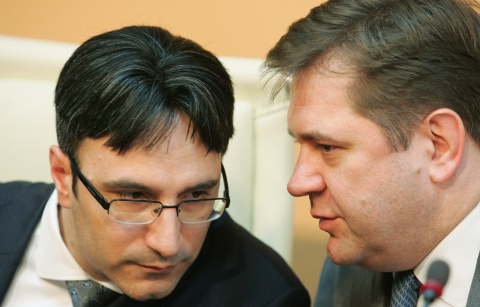 Bulgaria's Economy Minister Traicho Traikov and Russian Energy Minister Sergey Shmatko have not demonstrated any agitation over the scandal that shook the Bulgarian government regarding the Bulgarian-Russian talks for the Belene NPP.

Traikov was in Moscow Wednesday night for the one-day session of the joint Bulgarian-Russian commission for economic cooperation. The session was delayed because Traikov arrived in Moscow several hours later than scheduled, his trip being delayed by the sorting out of the scandal in Sofia.

Traikov's name has figured prominently in the scandal based on the talks for the fate of the Belene project, which is supposed to be Bulgaria's second nuclear power plant, between the Bulgarian National Electric Company NEK and Atomstroyexport, subsidiary of the Russian state nuclear corporation Rosatom.

The scandal started on Tueday when Bulgarian Minister of Economy, Energy, and Tourism Traicho Traikov declared he would fire NEK CEO Krasimir Parvanov because the latter had signed an agreement with Atomstroyexport that he was not authorized to sign, and which was detrimental to Bulgaria's interest by setting June 1, 2011, as a deadline for making a final contract with Russia on Belene.

On Wednesday, however, Traikov was severely scolded by Prime Minister Boyko Borisov since it turned out that NEK CEO Parvanov had coordinated his actions with Traikov's superior, Finance Minister and Deputy PM in charge of the economy, Simeon Djankov, and will now keep his job.

Talking to the correspondent of the Bulgarian National TV late Wednesday night in Moscow, the Bulgarian Economy Minister refused to comment explicitly on the Belenegate, and said that the entire issued will be sorted out once Finance Minister Simeon Djankov comes back to Bulgaria from his US tour, which means – over the weekend.

Both Traikov and Russian Energy Minister Sergey Shmatko were reported to have completed the session of the bilateral commission in a "cheerful" disposition. Shmatko has made no mention of the situation with the Belene talks, but has declared that Russia was awaiting a swifter solution on the issues with the Burgas-Alexandroupolis oil pipeline, the troubled project for transporting Russian and Caspian oil from the Black Sea to the Mediterranean via Bulgarian and Greek land territory.

Even though the session of the Bulgarian-Russian economic cooperation commission was supposed to take place over two days, and the Russians curtailed it to one day in the last moment, Traikov told BNT he did not see this as an act of pressure against Bulgaria over the Belene NPP, and that Russian Ambassador in Sofia Yury Isakov had assured him this was not the case.