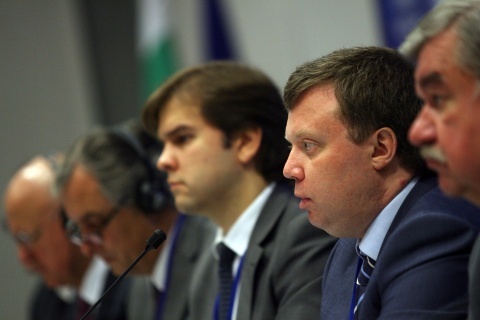 Rosatom executive Kiril Komarov is pictured here during a press conference in Moscow at the end of March, where he voiced hopes that the construction of Belene will start in 2011. Photo by BGNES

Rosatom has not taken a decision to freeze the Belene plant, a spokesman for the company said in Moscow on Tuesday.

"No such bilateral documents have been signed," Sergei Novikov said, as cited by Bloomberg agency.

Earlier in the day Bulgaria's Economy Minister Traicho Traikov fired the head of the National Electric Company NEK Krasimir Parvanov after he signed an agreement with Rosatom's subsidiary Atomstroyexport that potentially threatens Bulgaria's national interests by obliging the Bulgarian government to reach a final agreement with the Russians on Belene by June 1, 2001.

Bulgaria's National Electric Company (NEK) and Rosatom's subsidiary Atomstroyexport signed Tuesday a Memorandum of Understanding to extend the analysis on the project by 3 more months - until June 30, 2011.