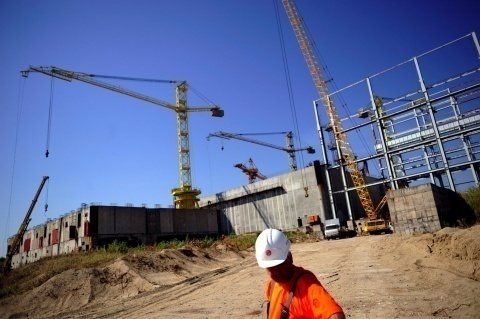 A file picture dated 03 September 2008 showing workers during the construction of the first 1 000 MW unit of the second nuclear plant of Belene, Bulgaria. Photo by EPA/BGNES

Russia is piling up huge pressure on Bulgaria to convince it into building Belene nuclear power plant and Tuesday's controversial agreement is yet another proof of that, according to the leader of the country's biggest right-wing party.

"The fact that the head of Bulgaria's state utility NEK put his signature under an agreement with Russian state nuclear company Atomstroyexport just comes to prove how pressurized he felt by the Russians," Martin Dimitrov, chairman of the Blue Coalition, told Dnevnik daily on Tuesday.

Earlier in the day Bulgaria's Economy Minister Traicho Traikov fired the head of the National Electric Company NEK Krasimir Parvanov after he signed an agreement with Rosatom's subsidiary Atomstroyexport that potentially threatens Bulgaria's national interests by obliging the Bulgarian government to reach a final agreement with the Russians on Belene by June 1, 2001.

Bulgaria's National Electric Company (NEK) and Rosatom's subsidiary Atomstroyexport signed Tuesday a Memorandum of Understanding to extend the analysis on the project by 3 more months - until June 30, 2011.

"Krassimir Parvanov was well aware that because of his actions he will most probably be fired and despite that he signed the agreement. It is either a question of strong incentives or strong pressure," said Dimitrov, who is chairman of the parliamentary commission of economic policy and energy.

He said the minister's decision to fire Parvanov was a right step.

Dimitrov refused to comment whether the contract is legally consistent, being signed by Parvanov, who had no prerogatives to commit the country to sign a binding document for Belene.