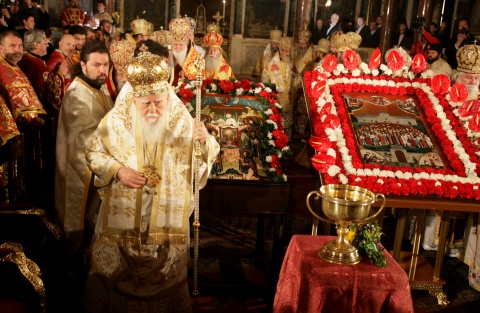 The Bulgarian Orthodox Church has canonized the martyrs of massacres committed against Bulgarian civilians by Ottoman irregulars and troops in the April Uprising of 1876.

Thousands of Bulgarian freedom fighters rebelled against the authorities of the Ottoman Turkish Empire in April 1876 seeking to liberate their nation and create an independent nation state.

The so called April Uprising was crushed with great violence by Ottoman forces but its coverage in the European press – facilitated primarily by American journalist working for British papers Januarius MacGahan – led to an international outrage and a humanitarian intervention in the Russo-Turkish War of 1877-78 that liberated the Bulgarian nation-state.

A total of 30 000 Bulgarians, mostly civilians including women, children, and elderly, are estimated to have been slaughtered by the Ottoman forces in April and May 1876.

Between 4000 and 5000 Bulgarians were butchered in the Batak Massacre – in the southern town of Batak – described by MacGahan in a shocking account, while some 700 were slaughtered in the region of Novo Selo, Kravenik, Batoshevo, and Apriltsi – villages in Northern Bulgaria near Lovech.

While thousands of Bulgarians were murdered by the Ottoman Turkish forces, the Bulgarian Orthodox Church has canonized the victims of the Batak and Novo Selo massacres in particular as martyrs and defenders of the Christian faith as they sought refuge from the troops dispatched against them in local churches and monasteries.

In the case of the Novo Selo massacre, the Bulgarian Orthodox Church canonized in particular two monks and seven nuns from a local monastery who were tortured and murdered by the Ottoman troops.

The canonization performed Sunday in the St. Alexander Nevsky Cathedral in Sofia by Bulgarian Patriarch Maxim was followed by a street procession honoring the newly proclaimed saints. Patriarch Maxim consecrated specially designed icons of the martyrs authored by icon artists Miroslav Asenov and Vladimir Avramov. The icon of the Holy Martyrs of Batak will be kept to Plovdiv, north of Batak, and the icon of the Holy Martyrs of Novo Selo will be kept in the town of Apriltsi.

"We accept the decision of the Holy Synod and believe that the martyrs of Batak and Novo Selo deserve to be canonized," declared Bulgarian President Georgi Parvanov in the Alexander Nevsky Cathedral. The canonization of the martyrs of the 1876 April Uprising was also welcomed and attended by Bulgarian Parliament Chair Tsetska Tsacheva, Sofia Mayor Yordanka Fandakova, and hundreds of Bulgarians including MPs.

"We are here to pay our respects to the martyrs for the faith and freedom of Bulgaria," Tsacheva declared.

Dozens of residents of the town of Batak also came to Sofia for the canonization.