Bulgaria Socialist MP Left High and Dry with No Salary 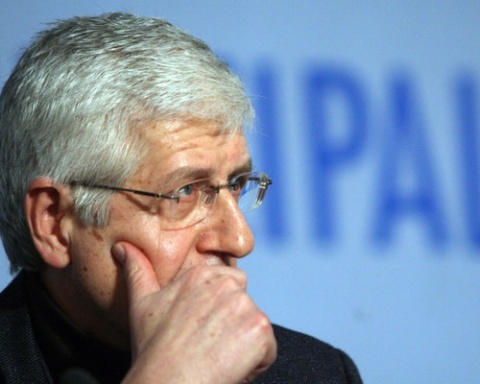 "You are not the ones who pay my salary, so I have no reason to tell you whether my bank account is frozen or not," Rumen Ovcharov snapped, when approached for comment by 24 Hours daily. Photo by BGNES

Socialist Rumen Ovcharov, Bulgaria's former Energy and Economy Minister, who left the previous government in the wake of a corruption scandal, has been dealt an unexpected blow by a dead foe.

At the beginning of the month Ovcharov was unpleasantly surprised to find out that his latest salary as member of the Bulgarian parliament has not been transferred to his bank account, as it was frozen upon the order of a judge.

The move came after Ovcharov refused to cover the court costs for a case he lost in 2007.

Back then the former economy minister raised a libel suit against Iliya Bozhinov, founder and chair of Bulgaria's alternative left-wing party "Bulgarian Left Wing"  and an outspoken critic of the Socialist party and its leaders,  who has repeatedly accused Ovcharov of lobbying for Frontier consultancy.

He was obliged to pay BGN 2 800 to cover the costs, but has doggedly refused to do so.

Bozhinov's lawyer, who raised the charges on behalf of his son, said Ovcharov's bank account was frozen with a big delay because the private enforcement agent was repeatedly denied access to the parliamentary accountant's files.

"You are not the ones who pay my salary, so I have no reason to tell you whether my bank account is frozen or not," Ovcharov snapped, when approached for comment by 24 Hours daily.

Bulgaria's Economy and Energy minister resigned from the previous Socialist-led government in May 2007 after an avalanche of dismissal calls by people in his own party, including Iliya Bozhinov, also a member of the Socialist Party's supreme council at the time.

Bozhinov entered into an open conflict with Rumen Ovcharov, slammed him for his reported involvement in corruption schemes, and pressed for his resignation.

Iliya Bozhinov died suddenly in August 2010, while vacationing in a camping site on the Black Sea coast.

The cause of death was listed as "serious stomach ailment" triggered by long-running alcohol abuse and drinking of poor quality liquor. Friends and relatives insisted he was not a heavy drinker, knew about his pancreas condition and took good care of his health.

Curiously enough, just days after Aleksei Petrov aka The Tractor, dubbed the country's top underground figure, was arrested in February last year, Bozhinov said he was determined to testify in the case and offer scandalous facts.

Reports say the President Socialist Georgi Parvanov personally called Bozhinov to pressure him into not getting involved.