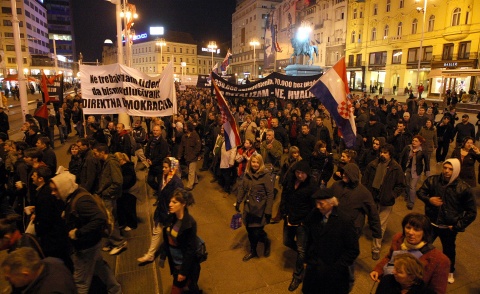 Protesters carrying Croatian flags and anti-EU banners as they march towards the government complex in central Zagreb, Croatia, 12 March 2011. EPA/BGNES

Croatia's negotiations for EU accession are very unlikely to be completed by mid 2011, and will probably drag on into the fall, according to a report of the Croatian channel HTV.

Contrary to the hopes of the Hungarian EU Presidency that it will be able to complete Croatia's EU accession talks by June 2011 when its term expires, it is becoming increasingly clear that the negotiations will continue under the Polish EU Presidency in the second half of the year, HTV reports as quoted by BGNES.

It cites EU Commissioner for Regional Policy, Austrian Johannes Hahn, as saying that Croatia will become a member of the EU in the next financial framework (i.e. 2014-2020) but that it is still an open question what will be the exact date even though the accession talks are towards their end.

Because of Croatia's EU accession talks, the government and the opposition have made a "truce", with the opposition committing not to demand early elections, while PM Jadranka Kosor promising to schedule elections as soon as the negotiations are completed.

Over the past months a number of Croatian cities have been seen protest rallies against corruption and the lack of reforms, with demands for early elections.