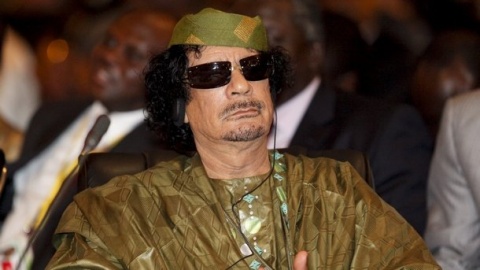 Libyan Dictator Muammar Gaddafi is said to have been secretly exploring with London a possible exit strategy. Photo by BGNES

A Libyan envoy, representing Muammar Gaddafi, has been in London in the past few days for talks with British officials, BBC reports Friday.

The envoy is identified as Mohammed Ismail, an aide to one of Gaddafi's sons.

The British Foreign Office has refused to confirm the visit on the grounds it was "not going to provide a running commentary on our contacts with Libyan officials, but that in any contact that we do have we make it clear that Gaddafi has to go".

According to BBC, it seems that the envoy may have wanted to explore a possible exit strategy for the Libyan leader and it is not clear on whose authority within the regime Ismail was in London. The envoy is thought to have already returned to the Libyan capital, Tripoli.

The reports of Ismail's visit come on the heels of the Wednesday defection of Libyan Foreign Minister, Moussa Koussa to the UK.  British diplomats and intelligence officials continue to debrief him in London while UK Prime Minister David Cameron says Koussa's defection told "a compelling story of the desperation and the fear at the very top of the crumbling and rotten Gaddafi regime".

Cameron insists Koussa had not been offered immunity from prosecution. Scottish prosecutors have asked to interview him about the 1988 Lockerbie bombing, which left 270 people dead, though government sources told the Guardian they did not think he was involved.

There are several, not yet confirmed reports that Libyans, holding high-ranking posts in the Gaddafi regime are defecting, following in the footsteps of  the Libyan Foreign Minister.

Oil Minister Shukri Ghanim has denied any intention to leave Libya. Ali Abdul Salaam Treki, who was recently named as Libya's permanent representative to the United Nations, is not accepting the post.

Meanwhile, the US says air attacks have destroyed about a quarter of the Libyan government's military's capabilities.

The Chairman of the US Joint Chiefs of Staff, Adm. Mike Mullen, said, however, this did not mean that Gaddafi's forces were close to breaking point and they still outnumbered Libyan rebels about 10-to-one. He also revealed that bad weather had stopped the coalition from identifying targets over the past three or four days.

The Libyan rebels are trying once more to advance westwards along the Mediterranean coast, but were halted by the government troops' in Brega while Gaddafi loyalists earlier invaded Ras Lanuf.

NATO, which now has the command of the military operations in Libya, announced it is investigating reports of civilian casualties caused by air strikes on Tripoli.