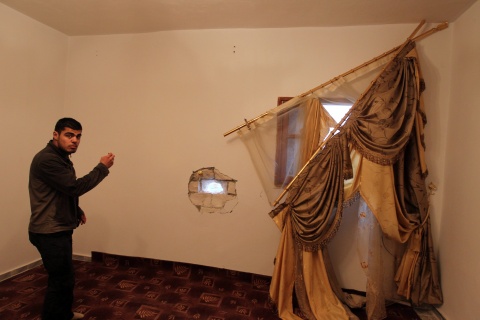 Damage is seen inside a house supposedly hit by a NATO rocket in Gharyan, 100 kms southwest of Tripoli. Photo by EPA/BGNES

The Bulgarian Embassy in the Libyan capital Tripoli is the only EU one currently open and functioning.

The information was reported Thursday by the Bulgarian National Radio, BNR, after an earlier announcement Greece is evacuating all their diplomats from Libya.

The Bulgarian Foreign Affairs Ministry reiterates their insistent appeal for all Bulgarian citizens to leave the country over the raging civil war and NATO mission. According to Ministry's data, about 200 Bulgarians remain in different Libyan cities. The institution further says they are fully prepared to evacuate Bulgarian diplomats as well.

The Foreign Ministry reminds that chances to leave Libya diminish by every passing day.

BNR further informs that 7 Bulgarian citizens have been evacuated on board of a Russian airplane departing from Tunisia late Wednesday evening. Three of them are expected to arrive in Sofia Thursday, after spending the night in Moscow.

Diplomatic sources have said a total of 9 Bulgarians have asked for assistance to leave Libya, but 2 later changed their mind.