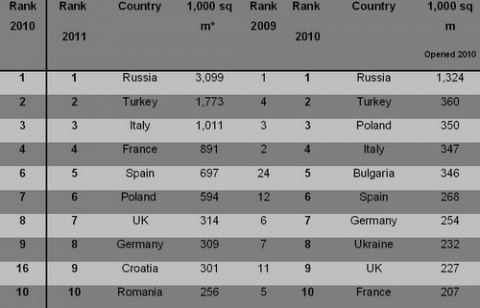 The space of offering in shopping malls in Bulgaria grew by 475% in 2010 year-on-year, according to a Cushman & Wakefield report announced by its local partner Forton International.

At the same time, the Cushman & Wakefield analysis points out that in 2010 the development of new commercial space centers in Europe saw its steepest decline since 1983.

Thus, Bulgaria is ranked in the top 5 in Europe on the amount of new commercial space in 2010 after Russia, Turkey, Poland, and Italy.

In 2011, however, Bulgaria will be out of the top 10 on that criteria since the only new shopping center will be the Markovo Tepe mall in Plovdiv, Forton points out.

"The Bulgarian market of commercial space is developing in its own micro-environment, while the common European trends affect it later and only partly," commented Dimitar Kiferov, commercial space manager at Forton.

A total of 165 new shopping malls with a combined space of 5.2 million square meters were completed in Europe in 2010, which is a 30% decrease of new commercial space compared with 2009.

There are more optimistic estimates for 2011 when a total of 6.9 million square meters of commercial space are expected to enter the market, or a 33% increase.

The combined share of Russia and Turkey is over 40% of the new malls in Europe.

In Western Europe, Spain and Italy registered the highest increases of new shopping mall space, while Germany, France, and Portugal saw the smallest.

The largest shopping mall under construction in Europe is Stratford City in London with an all-out built-up area of 176 500 square meters.