Belgium Sets World Record for Being without Official Govt 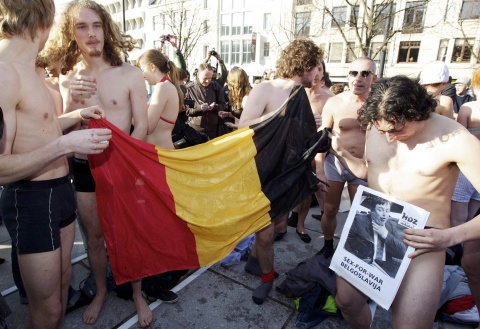 People participate in a protest with 249 people doing a striptease, organized to protest against the ongoing government formation negotiations, in Gent, Belgium, 17 February 2011. Photo by EPA/BGNES

Belgium has set a new world record for remaining without a government for 289 days, leaving Iraq the second country to have experienced the longest period with no official government.

However, there is an atmosphere of indifference in the country that there has not been a government since the general elections in June 2010, EurActiv reported on Wednesday.

Even though the political crisis in Iraq in 2010 made citizens throw shoes against cardboard figures of politicians to mark their disenchantment, no such event has taken place in Belgium and international media appears to have paid more attention to the situation than local media.

The new record was "celebrated" with a so-called "chips revolution" staged by students in several cities across the country.

In Brussels, Antwerp, Namur, and Ghent, the city squares were renamed "Chips Square". Some 5000 people gathered on the streets and were treated with free chips, according to reports.

"Separatism: not in my name," was the slogan of the students. In Belgium, chips are seen as a symbol of hope for the future togetherness of the country.

Even though it does not have an official government, the country handled the economic crisis better than most of the European countries and is expecting a growth of 2% in 2011.

Belgium managed to adopt a budget for this year and in spite of the government's limited mandate, managed to also send Belgian fighter jets to enforce the no-fly zone in Libya.

The indifference to the prolonged forming of an official government might also be a result of the fact that it is not unconstitutional or unusual.