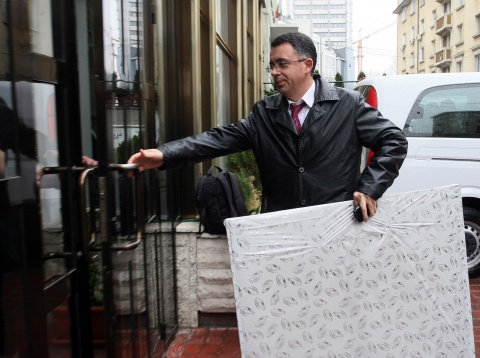 The mayor of Kardzhali, Hasan Azis, arrives with his gift at the headquarters of the DPS party to greet leader Ahmed Dogan for his birthday. Photo by BGNES

Members and supporters of the Bulgarian ethnic Turkish party DPS went Tuesday to its headquarters to greet the leader Ahmed Dogan for his 57th birthday.

A long line of gifts awaited Dogan. The mayor of the Bulgarian city of Kardzhali, Hasan Azis, arrived to Sofia carrying a painting, while the mayor of the village of Garmen, Ahmed Bashev, chose a rug as his present.

Other gifts for the leader included luxurious items of world famous brands, as well as flowers.

"Every nation has a leader. We are a minority and every year we express our gratitude to him or what he has done for us, for everything we have. We are proud of him. This is a true leader. Some people demand a change, but this is apparently triggered by other circumstances," said the leader of the Roma population, Gyursel Aliev, who is a DPS activist and came to wish "Happy Birthday" to Dogan.

Aliev told the Bulgarian daily "24 Chasa" (24 Hours) that his gift is a painting of the Blue Mosque in Istanbul.

A DPS member has revealed that the party leader will also receive many books, since he has a great passion for reading.

In 2009, the Prime Minister at the time, Sergey Stanishev, presented Dogan who was his governing partner with a microscope from the 1940s.