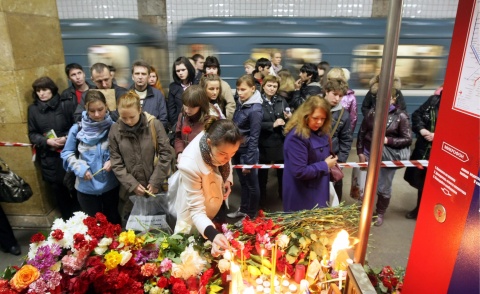 The investigation has identified all of the perpetrators and masterminds of the Moscow metro terrorist attacks that killed 40 people on March 29, 2010.

The spokesman of the Russian Investigative Committee, Vladimir Markin, has told Itar-Tass that all six perpetrators have been killed and one is put on the international wanted list.

"To date, investigators of the Investigative Committee of Russia have identified all the actual perpetrators and masterminds of the attacks," he said.

He added that the mastermind of the explosions at the Lubyanka and Park Kultury stations of the Moscow Metro was Magomedali Vagabov, one of the leaders of subversive and terrorist underground force in the territory of the Republic of Dagestan.

"Vagabov, the same as the other accomplices in the crime - Aliyev, Schaschayev, Magomednabiyev, Rabadanov and Isagadzhiyev, offered armed resistance during their detention and were destroyed," Markin said.

In his words, the Investigative Committee, the Federal Security Services and the Russian Interior Ministry have carried out a large amount of work over the year that has passed since the terrorist attacks.

"They have questioned more than 500 witnesses, conducted 322 different forensic examinations, including bomb examination, chemical, technical and others. More than 40 searches have also been conducted," Markin said.

He added that one of the culprits, 22-year-old Dagestani Gusen Magomedov, accompanied the two suicide bombers and coordinated their actions on the day of the attacks.

Magomedov is still on the loose, but an international arrest warrant has already been issued to detain him.