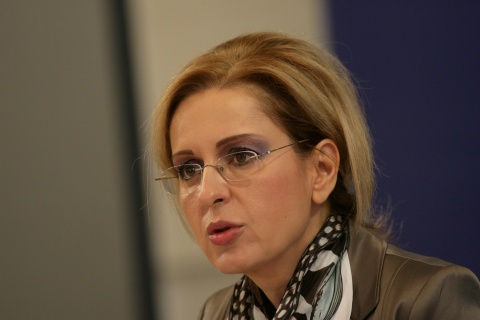 Bulgaria's Finance Ministry has reduce its economic growth forecasts for 2012 and 2013 in light of the civil unrest in the Arab world and the aftermath of the devastating earthquake that hit Japan on March 11.

Thus, Bulgaria's economy is now expected to grow by 4.1% in 2012 instead of the original figure of 4.7%; in 2013, the growth is forecast to be 4% instead of the 4.9% previously expected, Bulgaria's Deputy Finance Minister Boryana Pencheva announced at a public presentation of the government's National Program for Reforms 2015 drafted in the context of EU's "Europe 2020" strategy.

In spite of the downgraded forecasts, however, Pencheva did point out that the situation in the Middle East might end up have some positive effects on the Bulgarian economy.

"The situation in the Middle East is really very complicated. This will affected the market of fuels and raw materials, which might have varying consequences for Bulgaria. Some of this dynamic might affect Bulgaria's export and its growth, and might also redirect investments from the Middle East to Bulgaria," she stated.

The National Reform Program that she presented specifies Bulgaria's major goals within the application of the Europe 2020, including reaching a 76% employment by 2020, and spending on research and development amounting to 1.5% of the GDP.

While the goal for the entire EU is 2.8%, Bulgaria's lower goal has been based on the fact that its current R&D spending is much smaller than the EU average.

By 2020, Bulgaria's energy efficiency is supposed to increase by 25%, while the renewable energy sources as calculated in the end consumption of energy are supposed to reach 1.5% of the GDP.

In the next 10 years, the government plans to lift 260 000 Bulgarians out of poverty, to reduce the number of school dropouts by 11%, and see 36% of the Bulgarians aged 30-34 with university education.

Deputy Finance Minister Boryana Pencheva has stressed investments in road and environmental infrastructure as Bulgaria's priorities, which are supposed to lead to accelerated economic growth in the medium run.

Pencheva said Bulgaria's National Program for Reforms 2015 incorporated recommendations of the European Commission in its annual economic growth review, which focus on fiscal consolidartion and policies for stimulating the labor market and national reforms.

Bulgaria's Finance Ministry is supposed to submit the final version of the National Reform Program to the European Commission by April 30, 2011, once it has been approved by the Cabinet.

During the presentation of the National Reform Program, Pencheva also said the government is preparing legislative amendments to permit investing the money in the so called Silver Fund, or as it is more technically known, a state fund to guarantee the sustainability of the state retirement system. At present, the state is not allowed to carry out operations with the money in the Silver Fund.