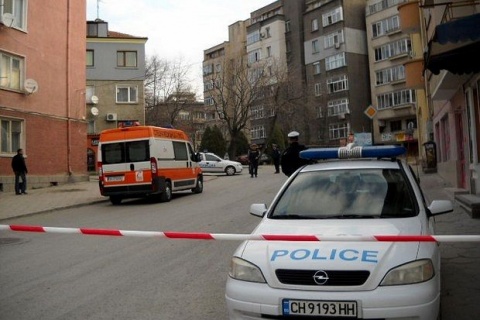 A young Bulgarian man held hostages at gunpoint for long hours inside the Investbank branch in the city of Sliven. Photo by BGNES

Bulgarians from the village of Korten, near the town of Nova Zagora, have started collecting signatures in defense of the failed bank robber, Stefan Petrov Stefanov, who is from the same village.

Om March 23, Stefanov, 27, busted in the local branch of Investbank in the city of Sliven, and shot and seriously wounded one of the security guards, who is still in critical condition. The assailant took the six bank employees hostages and gradually released them with the last one being held for over 18 hours.

He surrendered to the police 39 hours after the beginning of the ordeal. The Prosecutor's Office charged him Saturday with 3 counts and he is facing life behind bars.

In the course of just 3 hours, 250 people from Korten and Nova Sagora have signed the petition. Organizers say they want a lighter sentence for Stefanov; declare readiness to provide moral and material support for him, and point out the incident has been triggered by the difficult economic situation in the country.

The petition will be sent to the President, the Prime Minister, the Speaker of the Parliament, the Interior Minister, the leaders of political parties, the Chief Prosecutor and the Sliven District Prosecutor.

The Sliven Regional Governor, Marin Kavrakov, told the Bulgarian National Radio, BNR, Sunday he could not believe this can be a spontaneous reaction, adding he saw "something coming from the left."

"This means that we can tell everyone who is hungry to butcher someone younger and eat them. Our society would fall apart if we start on this slippery slope. Being short of money or having issues cannot be a reason to rob banks and take hostages," the outraged Governor said.