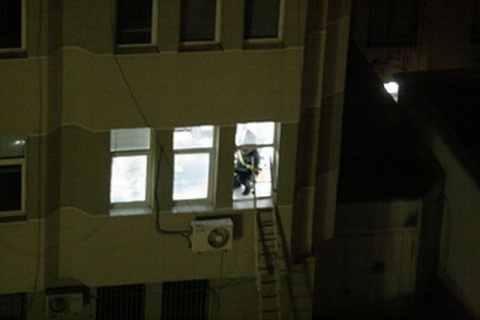 The operation for the evacuation of the employees of the Sliven municipal administration. Photo by BGNES

Another three hostages have been released from the Investbank branch in the city of Sliven, the largest private TV channel bTV reports.

They are Ivelina Teneva (Chief Accountant) and Mimi Velichkova (cashier) - the two were released at 4 am Thursday morning while around 7:30 am, footage showed police escorting a man outside the bank. It is believed he is Dimitar Mitkov – the second security guard.

The two women have been taken for a thorough medical exam at the Sliven hospital.

Ivelina says she did not know the assailant, but he treated the hostages relatively well and had not been aggressive.

At 10 pm Wednesday, the robber released the first hostage – bank loan expert, Radina Terzieva, in exchange of a pack of cigarettes and a bottle of soda. Around this same time, the employees of the municipal administration, located in a building across the bank branch, were evacuated.

Security guard Stancho Stoev, who was shot by the yet unidentified man, upon him bursting in the bank, underwent emergency surgery and it is reported his life is out of danger, but his condition remains very serious.

According to the bTV report, only one hostage remains inside, and the assailant had said he doesn't want money anymore, regrets the attack, and would not hurt the last person who is with him.

It is expected the crisis would end any moment now.

The hostage drama began around 4 pm Wednesday. Chief Secretary of the Interior Ministry, Kalin Georgiev, is personally leading the special task force team at the location.

Several shots have been fired at different times during the now 16-hour long holdup. Reporters at the scene say they have counted about 17 shots by 6 pm Wednesday.

According to unofficial reports, Prime Minister, Boyko Borisov, has also arrived at the location. The Sliven Mayor, Yordan Lechkov, the Chair of the Municipal Council, Maria Georgieva, and Regional Governor, Marin Kavrakov, are also there.

The area around the bank remains sealed-off by the police and people in the nearby buildings are not allowed to leave their homes.