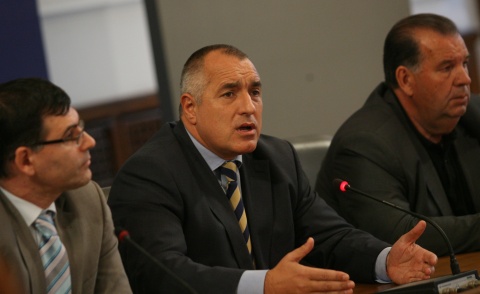 Bulgaria's Cabinet made an agreement with Lukoil Bulgaria, the largest Bulgarian fuel producer, that the company will place a one-month moratorium on the increase of its gas and diesel prices.

The agreement was achieved amidst continuing talks Wednesday among the government, transport companies, and fuel producers and distributors, and after a scandal in which Prime Minister Boyko Borisov took the side of Lukoil CEO Valentin Zlatev in an argument with his Economy and Energy Minister Traicho Traikov.

Another issue of contention on Wednesday – clearly stemming from Traikov's conflict with Zlatev – was the fact that Traikov and Transport Minister Alexander Tsvetkov were not present at the talks, and the government was represented only by Prime Minister Boyko Borisov and Finance Minister and Deputy PM Simeon Djankov.

The scandal has had wide repercussions with key opposition figures accusing Borisov of favoring Lukoil CEO Valentin Zlatev, was described "Bulgaria's oil oligarch" pulling the strings of the government.

The talks came into being after early last week car marches across the country protested recent fuel price hike.

Bulgarian PM Borisov said that the one-month moratorium agreed with Lukoil was not a market mechanism but that he used his authority to negotiate it because the state of the Bulgarian economy and the end consumer are highly important for his Cabinet.

Bulgarian Finance Minister Simeon Djankov is continuing talks with other producers and distributors of fuel; there are also continuing negotiations with Lukoil Bulgaria, which owns and operates the largest Bulgarian oil refinery located in Burgas, to extend the price hike moratorium.

In addition, the government is planning several other measures to rein in fuel prices including an amendment of the Renewable Energy Act that will abolish temporarily the obligation of the producers to include a small percentage of biodiesel in the diesel they sell. This measure is expected to reduce the diesel prices by BGN 0.06, and to take effect in 2-3 weeks, and will be in force by the end of 2011.

By restructuring the State Reserve, the government will reduce temporarily the amount of fuel that companies are obliged to keep on stock, which is also said to drive down the end consumer price.

The State Reserve measure is expected to drive down fuel prices by about BGN 0.14, Finance Minister Djankov said.

For the time being, the government has not adopted the transport firms' demand to collect duties on imported fuel on the border; at present, the duties are collected in tax authority's storage facilities.

PM Borisov said the fuel talks will continue on two other issues – refunding VAT on fuel to large transport companies that buy fuel on Bulgarian territory; enforcing an agreement with Turkey that bans them from entering Bulgaria with more than 550 liters of fuel. At present the amount reaches 1 200 liters – purchased from duty free gas stations, which allows heavy trucks to pass through Bulgaria's territory without having to purchase fuel here.

Borisov said the enforcement of these provisions was the job of Finance Minister Djankov and Customs Agency head Vanyo Tanov, and that the government will be mulling some additional measures to fight fuel contraband.

Djankov said that the government is considering the proposal of the transport companies to allow them to import fuel from abroad. The Customs Agency, however, is concerned that this will increase contraband.

The representative of the transport companies, Chair of the National Transport Chamber Koycho Rusev, has made it clear that they are satisfied with the government measures.

When asked about the absence of Economy and Energy Minister Traicho Traikov from the talks, Borisov said that nobody can order him how and with whom to hold negotiations, and that from the very beginning the talks with the fuel producers and transport companies were handled by Finance Minister Simeon Djankov, while Traikov was never formally part of them.

After slamming Traikov earlier this week over his dispute with Lukoil CEO Valentin Zlatev, Borisov did praise his Economy Minister saying the two of them met "at home" last night.

"Minister Traikov has my trust, I appreciate his desire to seek maximum transparency, and the only thing for which I criticized him ever was that before saying something publicly, he must check it first, and then announced it," declared the PM, who is himself known for his controversial and rapidly evolving statements.

"I personally asked the representative of Austrian company OMV if the salaries of the employees in their refinery are 20-30 times bigger than those in our refinery. He said that they are about the same. This kind of thing could have been checked in advance instead of making statements that would pit the society against a certain company," Borisov said regarding Traikov's "problematic" words that brought about the whole argument with Lukoil CEO Zlatev that there is a big discrepancy between Lukoil's fuel prices and the salaries at Lukoil's refinery in Bulgaria's Burgas.

The original statement that the workers' salaries in Lukoil Bulgaria are much smaller than in similar refineries in other countries was first made by rightist Blue Coalition leader Ivan Kostov. When reminded of that, PM Borisov's brief comment was: "As far as he is concerned, I don't even listen to him."