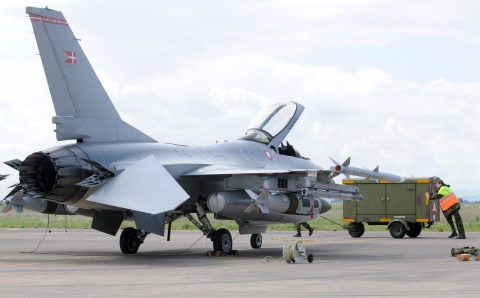 Danish airforce personnel walk on the tarmac next to Danish F-16 aircraft at the Nato airbase in Sigonella, Sicily island, Italy, 20 March 2011. EPA/BGNES

NATO warships have begun Operation "United Protector" patrolling off Libya's coast to enforce an arms embargo mandated by the UN.

Canadian Brigadier General Pierre St. Amand of NATO's military staff told a media briefing Wednesday that NATO had received offers for up to 16 vessels to patrol the Mediterranean.

He said Turkey alone had offered five ships and one submarine to join the operation, dubbed Unified Protector, which he said was now "under way," as cited by Radio Free Europe.

Bulgaria has started to prepare its frigate "Drazki" for participation in the operation but has not formally offer it yet as the Bulgarian leadership has not made a political decision.

Lungescu also said NATO allies were continuing to discuss the role of the alliance in the enforcement of the UN-mandated no-fly zone over Libya.

"Consultation on activation of those plans are currently ongoing among all 28 allies. There has to be consensus as 28 to activate that plan," she said.

But some members, including France and Turkey, have expressed reservations about the alliance taking the lead in the Libyan mission.

One compromise proposal has been made by France, which argues that operations led under the flag of the Western alliance could alienate Arab states.

Under that proposal, a special committee of foreign ministers from the international coalition would have political control of the mission - with Arab League participation.

French Foreign Minister Alain Juppe said NATO would intervene "as a tool for planning and operational action" in the international coalition in Libya but "will not exercise political leadership."