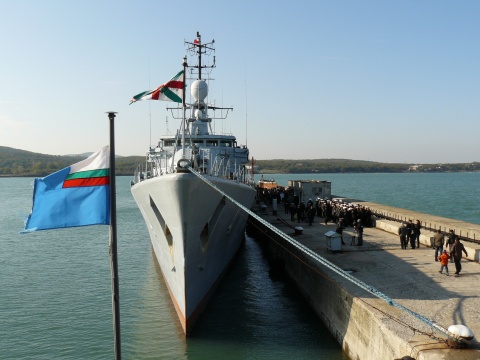 The Bulgarian Navy is preparing its Drazki ("Daring") frigate to take part in the NATO mission off Libya's coast. Photo by BGNES

Bulgaria's Defense Minister Anyu Angelov has issued orders to prepare the "Drazki" ("Daring") frigate of the Bulgarian Navy for participation in the NATO naval operation off Libya's coast.

The move is in accordance with NATO's Tuesday's decision to launch a naval mission in the Mediterranean in order to enforce the UN-imposed arms embargo on Libya where dictator Muammar Gaddafi is fighting a popular uprising.

The NATO naval operation will be separate from Operation Odyssey Dawn, which has been going on since Saturday, in which forces of leading Western powers and some Arab states have been carrying out air and missile strikes on Gaddafi targets in order to impose a no-fly zone over Libya mandated last week by the UN Security Council.

While Bulgaria's government made it clear it did not have the military capabilities – i.e. the necessary fighter jets – to take part in Operation Odyssey Dawn under the leadership of the USA, UK, and France, it did say that it can send one frigate to help enforce the arms embargo against Libya.

Defense Minister Anyu Angelov himself has confirmed the orders that he had given to the Bulgarian Navy for participation in the naval NATO mission.

He did say that while the Bulgarian Navy is preparing to take part in the NATO effort, it was not certain yet if it will participate in it; this would depend on the specific plan of the Alliance.

Bulgaria still has not offered its participation formally because the government has not technically made the political decision yet.

"This will happen when the development of the plan for the operation necessitates our participation," the minister said.

In 2009, Bulgaria purchased three second-hand frigates from Belgium - Drazki, Gordi ("Proud"), and "Verni" ("Faithful") and the Tsibar minesweeper. Interestingly, one of the frigates, Gordi, under the name F910 Weilingen as part of the Belgian Navy took part in the UN maritime embargo against Iraq - Operation Southern Breeze during the First Gulf War - in 1990-1991 - a naval operation similar to the one in Libya.

In addition to sending in the Drazki frigate, Bulgaria has confirmed its readiness to send two medical teams for a humanitarian operation on the ground in Libya. Gen. Angelov made it clear that no other forms of Bulgarian participation in Libya have been discussed.

If it sends in its frigate, Bulgaria will be following Romania, whose President Traian Basescu announced on Tuesday that his country will participate in the NATO naval operation off Libya's coast with the King Ferdinand frigate. The Romanian frigate will be manned by 205-member crew.