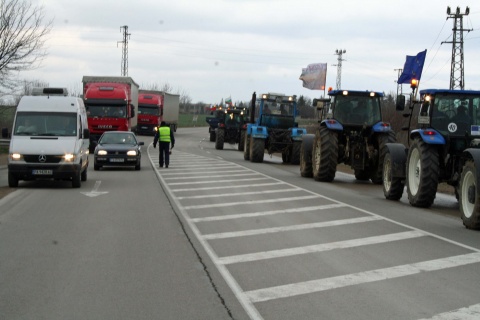 Last week, farmers blocked a number of roads across Bulgaria in protest against unpaid subsidies. Photo by BGNES

Bulgaria's Prime Minister, Boyko Borisov, has ordered a check of the memorandum between the cabinet and the country's grain growers to find out what clauses have not been executed and who is responsible.

The news was reported after 3-hour talks between the protesting farmers, Finance Minister, Simeon Djankov, Agriculture Minister, Miroslav Naydenov and Borisov, who also joined the meeting.

The check must be done in 10 days. Naydenov informs it would involve the State Fund Agriculture – the agency dealing with payments from the EU SAPARD program, and specifically the department in charge of direct payments.

Borisov's decision came on the heels of farmer blockades across the country as sign of protest against unpaid subsidies.

According to the memorandum from June, 2010, the cabinet has made the commitment to pay all subsidies to farmers by March 15, 2011. The payment campaign, however, started just days ago, with the explanation the first payments would be the EU ones, while those from the State budget would be provided only after the beneficiaries pay their taxes and insurance.

The delay was the reason for the farmers to rise in protest against problems created by bureaucratic administration, they say.

The two Ministers report progress in the negotiations has been achieved at the meeting, but they are to continue.

The Chair of the Association of Bulgaria's Grain Producers, Radoslav Hristov, announced he would inform Tuesday evening the Association's Board about the talks and would ask either for their continuation or for resuming the rallies on Wednesday. He too, failed to offer details.

At the end of last week, the Association demanded immediate payment of all subsidies and requested from the cabinet to lobby before the EU to lower the excise duty on fuels for the Bulgarian farmers. Djankov says he had not yet sent the request because the EU is currently discussing such move for domestic animal farms.