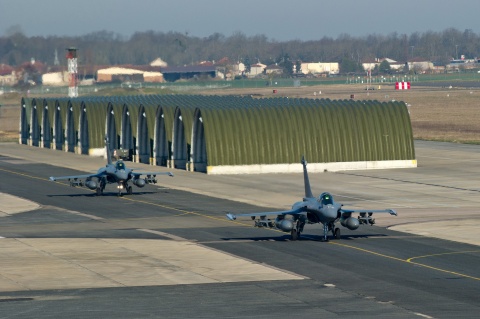 Handout photo issued on 22 March 2011, by the ECPAD (Ministry of Defense), showing Rafale airplanes at Saint Dizier military base, France, 21 March 2011. The Rafale have been used by the French Air Force to enforce the Libyan no-fly zone. Photo by EPA/BGN

China and India have called for an immediate end of the operation in Libya where US and European nations launched punishing airstrikes to enforce a U.N. no-fly zone.

"We oppose the use of force that could result in more civilian casualties and a humanitarian crisis," she said.

"We view with grave concern the ongoing violence, strikes and deteriorating humanitarian situation in Libya. We regret the air strikes that are taking place," Indian Foreign Minister stated, according to Xinhua.

China and India, along with Brazil, Russia, and South Africa (BRIC nations), plus Germany abstained from a voting last Thursday on the UN Security Council's 1973 resolution authorizing the international community to impose a no-fly zone over Libya.