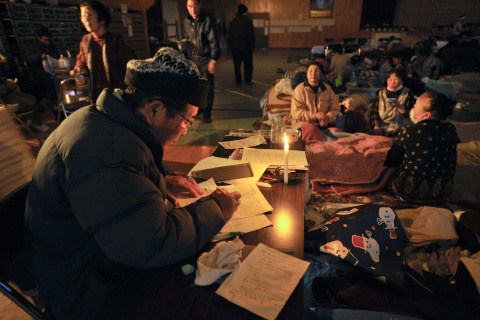 The death toll and the number of missing from the devastating earthquake and tsunami in Japan reached 21 911 on Monday, eleven days after the tragedy.

The number of deaths climbed to 8649, while the number of people reported missing reached 13 262, according to the Kyodo News Agency.

The police have identified about 4080 bodies, including 2990 who have been returned to their families.

A total of 340 000 people have been evacuated, including those who left the vicinity of the troubled Fukushima nuclear power plant. They have been accommodated in some 2070 temporary shelters.

"Until now we have asked relief workers to prioritize rescuing afflicted people. We now want them to give priority to assisting people who are living in the shelters," said Yoshihiro Murai, Governor of the Miyagi Prefecture.

He has sent a letter addressed to Japan's PM Naoto Kan, requesting aid for reconstruction.

Great difficulty persists in delivering relief goods to quake victims as well. In Sendai, the capital of Miyagi Prefecture, which has accommodated some 14,000 evacuees, people who took refuge at an elementary school building have been unable to eat frozen food due to a lack of electricity needed to microwave it. They are also still waiting for a large supply of underwear, local officials said.