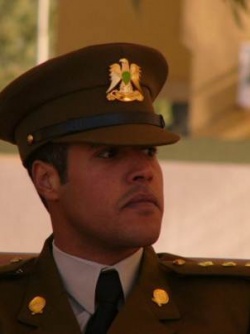 According to reports, Khamis Gaddafi has died in hospital from burn wounds. File photo

One of the sons of Libyan leader Muammar Gaddafi has reportedly died from injuries in a hospital in the capital Tripoli, according to information from opposition websites and Arab media.

Khamis Gaddafi was reportedly injured on Saturday by a Libyan air force pilot who purposefully crashed his jet into the Bab al-Aziziya compound in Tripoli where Gaddafi and some of his relatives were staying, The Times reported on Monday.

The publication cites the Arabian Business news website, which claims that Gaddafi's son died of burn wounds sustained during the attack.

Khamis, aged 27, is the sixth son of the Libyan leader and is a commander of the 32nd Brigade against the rebels.