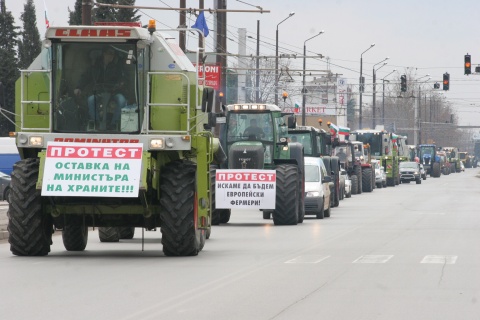 Farmers from 20 locations in Bulgaria are organizing processions with tractors in protest against unpaid subsidies. Photo by BGNES

Farmers from 20 Bulgarian locations are staging a protest Monday over unpaid subsidies which were due by March 15.

Bulgaria's grain growers accuse the Agriculture Ministry of failing to adhere to their commitment from June 2010, by signing a memorandum with them. They say only 10% of the subsidies have been received and demand the resignation of Agriculture Minister, Miroslav Naydenov, and Finance Minister, Simeon Djankov.

Naydenov insists 80% of the subsidies have been paid and the other 20% probably did not receive any money because they owe taxes while some have overextended the boundaries of their fields. He says the real reason for the protests is a demand for lower excise on fuels.

The grain growers declare they would not negotiate with Naydenov and/or Djankov and are inclined to talk only to Prime Minister, Boyko Borisov.

Farmers from the regions of Silistra, Dobrich, Vidin, Razgrad, Haskovo, Plovdiv, Sliven, Yambol, and Burgas, among others, are organizing processions with tractors and other equipment.

The Bulgarian National Radio, BNR, reports that grain growers with tractors have blocked downtown Plovdiv and several roads at the entrance for Bulgaria's second largest city are blocked.