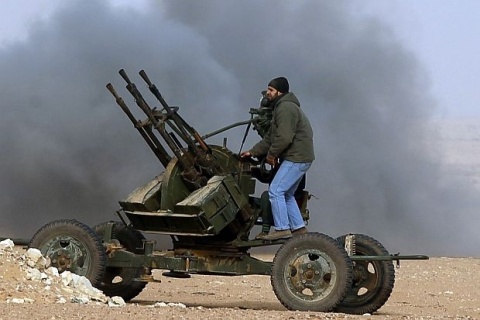 Fierce fighting continues in Libya despite government claims of ceasefire. Photo by EPA/BGNES

The Libyan government claims that its armed forces were observing a ceasefire are not considered valid by the US.

A spokesperson of the Libyan army announced Sunday a new ceasefire as coalition forces were pounding Libya from the air. The Gaddafi regime, however, made the same announcement Friday, after the UN Security Council resolution to impose a no-fly zone on Libya, but pro-Gaddafi forces continued their attacks on rebel stronghold Benghazi.

The BBC's reporter in Tripoli informs that despite the latest ceasefire claims, pro-Gaddafi troops have tried to enter Benghazi and have been in action at Misrata where heavy shelling took place late Sunday.

The action against Gaddafi's military began Saturday afternoon with French air strikes against targets in the east of the country. A barrage of more than 100 cruise missiles, launched from US and UK war ships and submarines followed.

US Defense Secretary Robert Gates has said that while the US will continue to play a part in military operations against Gaddafi's forces, it "will not have the pre-eminent role".

Gates also pointed out a break-up of Libya would be a formula for instability.

The east of the country, where the month-old revolt began, has historically been much more opposed to Gaddafi's rule, while the west and the area around Tripoli constitute his heartland.